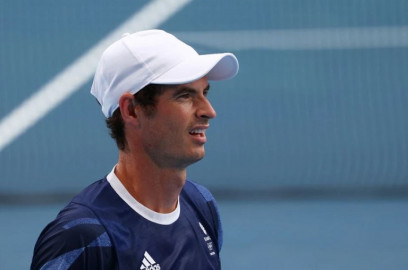 Andy Murray beat 2020 US Open champion Dominic Thiem comfortably to reach the second round of the Madrid Open.

Former world number three Thiem is continuing his own comeback after eight months out with a wrist injury but Murray proved the far stronger player.

They embraced at the end as Murray told Thiem: "Keep going. It takes a lot of time but you'll be fine."

He added: "I hope you feel better soon mate. Great to see you back."

The 34-year-old, who has had his own well-documented injury troubles, is the fourth British man into the second round after Cameron Norrie joined Dan Evans and wildcard Jack Draper in progressing earlier.

Murray achieved a break in both sets with Austrian Thiem struggling with his forehand in particular.

Thiem, now ranked 91st in the world, was playing his fourth match of the year, having begun his comeback in March, but remains without a win.

Murray had planned to skip the clay-court season but reversed his decision last month when accepting a wildcard for Madrid.

"I have hardly played on it [clay] for the last five years really," Murray said. "I did four weeks training so felt more comfortable than I usually do.

"I played well. I thought Dominic was playing well at times but he has obviously just started playing again as well."

Murray will next play Canada's 14th seed Denis Shapovalov, who beat him at Wimbledon last year.

Norrie, meanwhile, the current British number one, shook off illness and an early setback to beat South Korean Kwon Soon-woo.

Norrie, 26, was broken in his opening service game and trailed 4-1 in the first set, saving two set points before winning 7-5 7-5 against the qualifier.

"I've been a little bit sick, I sound like I've just smoked a packet of ciggies," said Norrie, who faces American John Isner next.

"But I'm feeling better every day."

He told Amazon Prime: "I was happy to even play here this week and was just fortunate to get a win like this against Soon-woo, who was confident and playing well."

Meanwhile, in the women's event, Romanian former world number one Simona Halep reached the quarter-finals with a 6-4 6-4 win over American 18-year-old Coco Gauff.

Halep, the 2018 French Open champion who is unseeded in Madrid following a series of injuries, has yet to drop a set as she finds some good form before the clay-court Grand Slam at Roland Garros later this month.