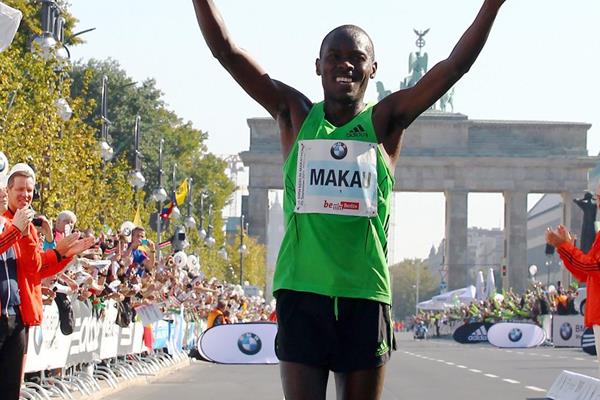 Former marathon world record holder Patrick Makau said he will be gunning for a podium finish at the forthcoming Boston Marathon as he appealed to Kenyans to register in large numbers for the Mully Half.

The 2011 Berlin Marathon winner is among 20 elite athletes who will be gracing the event set for May 14 and whose launch was held on Thursday.

Mutai is also a silver medalist in the IAAF World Championships while Kitwara has ran six half marathons in under one hour, lastly winning in Taipei Half Marathon in December 2016.

Makau, whose personal best (2:03.38) over the distance was registered in Berlin in September 2011, has also set his eyes on attempting the world record in the German city on September 24.

He revealed his preparations for Boston return have hit top gear after shaking off an injury that had laid him off since last year, when he finished second to Ethiopia’s Yemany Tsegay in Fukuoka International Marathon.

“I have regained my shape and I believe I will have a good show in Boston. I’m not targeting the course record or specifically the top honors, but to finish within the medal bracket.

“The injury was not very serious but it slowed down my preparations. I however hope to start my season well before I come back to prepare for the second major race in my calendar this year in Berlin,” the 32-year old runner said.

Besides the fellow Kenyan’s challenge, Makau will have reigning champion Lemi Berhanu, Dino Sefir, Sissay Lemma and Tsegay to beat in his quest for a top-three finish.

“I’m not so keen on who I will be competing against. There are very good athletes in that race but I know they look at me as a world beater too.

“I have done a lot on speed and hope it will reflect in the material day, all going well,” Makau underscored.

On the Berlin marathon later in the year, Makau is optimistic he will have regained his best form to lower the current world record of 2:02.57 set by Kimetto in the same course in 2014.

“I will be definitely going for the world record. I believe even if it is not under two hours that has been talked about, the current can be lowered,” Makau stated.

Makau noted he went through the struggles facing some of the children that the Mully Children’s Family seeks to help through the race proceeds.

“I came from a very poor background, but today I’m recognized world-wide. It is a statement everyone can make it, with the right support from those who are privileged.

“There is joy in participating in anything that uplifts the less fortunate in the society. Such is what Dr. Charles Mulli (the founder) is calling us to do, and it is indeed worthy,” Makau emphasized.

For those entering as teams of 2-10, charges are Ksh8000 and Ksh4000 respectively. Special categories ranging from Primary Schools, physically challenged, under 18 years, above 50 years, executive and church groups will part with Ksh50 to Ksh5000.

Winners of the men and women 21Km races will pocket Ksh450,000, with a possibility of increment as announced by event organizers.