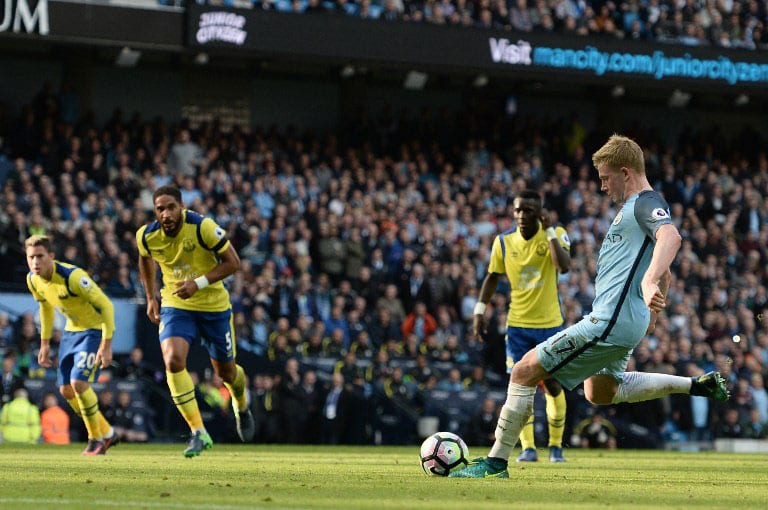 Manchester City twice missed penalties in a 1-1 draw with Everton on Saturday as 10-man Arsenal went level with them on points at the top of the Premier League table after seeing off Swansea 3-2.

Everton goalkeeper Maarten Stekelenburg twice dived to his left to save penalties from Kevin de Bruyne and Sergio Aguero — his second spot-kick failure this week after he was off target in Argentina’s World Cup qualifying defeat by Paraguay.

Toffees defender Phil Jagielka gave away both penalties, the first on the stroke of half-time, and it seemed Everton’s luck was in when Romelu Lukaku fired the visitors in front in the 64th minute at Eastlands before substitute Aguero’s miss.

But City, who’ve now gone three games without a win in all competitions, equalised in the 72nd minute when Nolito headed in Silva’s cross as former Barcelona team-mates turned managers Pep Guardiola (City) and Ronald Koeman (Everton) had to settle for a point apiece.

At the Emirates, Theo Walcott scored twice as Arsenal defeated Swansea for a sixth straight win in all competitions.

But Mesut Ozil marked his 28th birthday by restoring Arsenal’s two-goal advantage with a 57th minute-volley.

Swansea substitute Borja Baston pulled a goal back for the visitors and Arsenal had to play the final 20 minutes a man down after Granit Xhaka received a straight red card.

Tottenham dominated possession at the Hawthorns without scoring and were made to pay the price when former Spurs star Nacer Chadli scored eight minutes from time.

Liverpool will go level with the top two if they beat bitter rivals Manchester United on Monday.

Earlier, Chelsea dealt a fresh blow to champions Leicester City’s hopes of a successful title defence with a 3-0 win at Stamford Bridge.

Defeat meant the Foxes had won just two of their eight league games this season and manager Claudio Ranieri said: “We made mistakes…Our approach to the match was not good,” the former Chelsea manager added.

The result gave Antonio Conte, Ranieri’s fellow Italian, a much-needed win after speculation he was about to be sacked as Chelsea manager.

“From the start I asked them to play well with intensity and to try to do what we are doing in training,” said Conte. “I am very happy because I had a good reply. This is the best game for us.”

Stoke won in the league for the first time this season as Wales international Joe Allen made it four goals in his last three games by scoring twice in a 2-0 win at home to basement club Sunderland.

Elsewhere, Bournemouth thrashed Hull 6-1 as Mike Phelan’s first game in full-time charge of the Tigers ended in an a thumping defeat.

Hull’s Ryan Mason equalised in the 34th minute with a deflected shot.

Bournemouth regained the lead thanks to Steve Cook’s header and they were 3-1 up ahead of the break when Stanislas scored from the penalty spot.

Stanislas made it 4-1 before Callum Wilson and Dan Gosling both scored late on.

Middlesbrough are at home to Watford on Sunday when Southampton face Burnley.