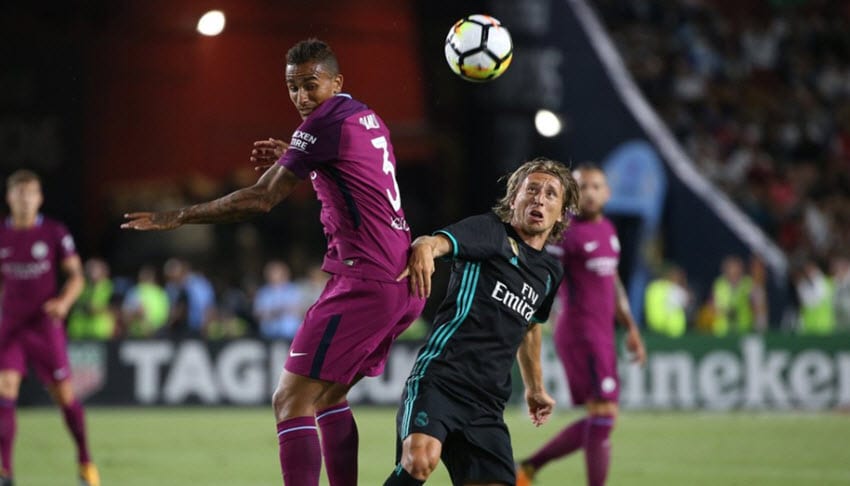 Pep Guardiola’s Manchester City has spent big to bolster their defence this summer, but showed they will be a force to reckon with at the other end this season in a 4-1 friendly win over Real Madrid on Wednesday.

Real were unable to contain Guardiola’s side once they got their noses in front early in the second half.

The £28.5 million (32 million euros, $37 million) spent by City on Nicolas Otamendi two years ago now almost seems like small change after City have splashed out around £50 million each on Kyle Walker, John Stones and Benjamin Mendy over the last 12 months.

But after Otamendi pounced from a couple of yards out to smash the ball into the net, the entire complexion of the International Champions Cup encounter changed.

Until that point, Real had been the more dangerous side in an end-to-end encounter, with Isco, in particular, causing City’s back five problems with his range of passing.

Gabriel Jesus and Sergio Aguero both went close at the other end, but once Otamendi found the net in the 52nd minute, on the rebound after Stones’s header was saved, City were rampant.

The advantage was then extended to three after Stones scuffed a shot into the far corner from a De Bruyne corner.

City were twice denied a third by the woodwork, with Francisco Casilla producing a stunning finger-tip save to push De Bruyne’s free-kick onto the post and then Leroy Sane smashing the ball against the near post within seconds of entering the field.

But the icing on the cake arrived for Guardiola’s side in the final 10 minutes, when 17-year-old Spaniard Brahim Diaz cut inside off the right and curled a beauty into the top corner from the edge of the area.

Real grabbed a late consolation when Oscar Rodriguez produced a stunning effort from 30 yards which soared into the top corner.