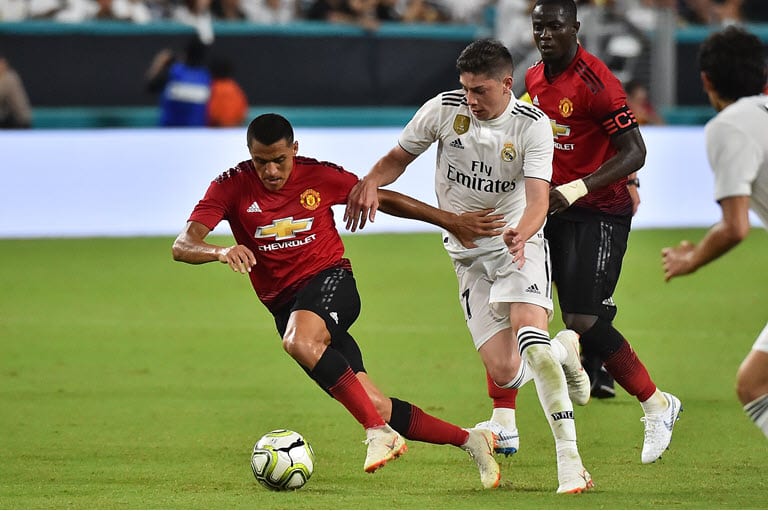 United can leave States with a smile

It has been a wretched three weeks – of that there can be no doubt – but the most testing pre-season tour in Manchester United’s recent memory is over now and has ended with a first win in 90 minutes.

Though his side did not dominate a Real Madrid outfit that claimed 71 per cent of possession and improved over the course of the evening, Jose Mourinho will find little to sulk about when watching this performance back. It may even provoke a smile.

United used what little they had of the ball well and at times found the fluency they have sorely lacked on this tour. The build-up to their second goal, converted by Ander Herrera, was quick, incisive and particularly encouraging.

Well-rested Sanchez is the source of inspiration

His first proper summer holiday in five years was prolonged somewhat by the United States Border Patrol, but Alexis Sanchez only looks better for the extended break.

Since overcoming the visa issues that delayed his start to this tour, the Chilean has been United’s main source of inspiration and appears to be building a better understanding with those around him.

This was Sanchez’s best and most influential pre-season outing so far. His finish for United’s opener, converting Matteo Darmian’s smart cut-back, was a fine one, but his knockdown to assist Herrera for the second better still.

Was this another less-than-subtle message to Ed Woodward, designed to underline the need for reinforcements? Perhaps, but the change in set-up brought some welcome variation to United’s play and was a major factor in their positive first-half performance.

Mourinho used a 3-5-2 sparingly last season and with mixed success, but it was responsible for their most impressive counter-attacking display of the campaign – the exhilarating 3-1 win at Arsenal.

Mata finds a role and thrives

One consequence of playing a 3-5-2 was that, with Romelu Lukaku unavailable and Sanchez up top, Juan Mata had another opportunity to play in a front two, dropping off the main striker.

The Spaniard was just as impressive as Sanchez and, like his strike partner for the night, he played a pivotal part in the build-up to the second.

Mata is still, in his sixth season at Old Trafford, yet to establish himself in a single position. He is, however, the only player in Mourinho’s squad who is at his best when tasked with linking the midfield and forward line and boasts a skillset United often overlook.

After a substitute appearance in Saturday’s defeat to Liverpool, newcomer Fred started in a United shirt for the first time and provided the composed presence that was required in the middle of the park.

The £52m signing from Shakhtar Donetsk not only did well in his recovery of the ball, but also showed neat footwork to escape Madrid pressure on more than one occasion.

These early impressions of Fred suggest that, though he is not as physical as the injured Nemanja Matic, he will stand up to being pressed better than his Serbian team-mate and distribute the ball well too.