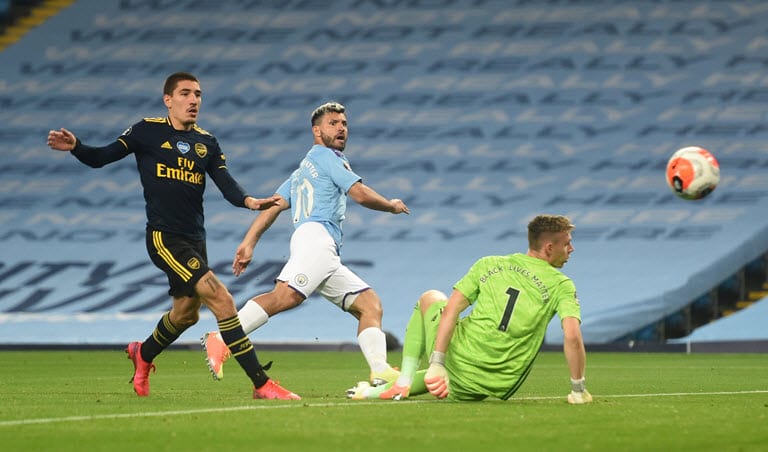 Arsenal’s David Luiz was sent off in a performance riddled with mistakes as Manchester City secured a comfortable victory behind closed doors on the first night of the Premier League’s return.

Luiz, who came on as a first-half substitute, failed to clear the ball just before half-time and Raheem Sterling fired in City’s opener.

The defender was then sent off after pulling back Riyad Mahrez in the second half to give away a penalty, which Kevin de Bruyne coolly slotted in for City’s second.

Substitute Phil Foden netted a third for the defending champions, capitalising on a rebound from Sergio Aguero’s strike.

There was concern for City late on as Eric Garcia needed several minutes of treatment on the pitch after a nasty collision with goalkeeper Ederson, and was carried off on a stretcher.

Arsenal were second best throughout as manager Mikel Arteta left Alexandre Lacazette on the bench and Mesut Ozil was kept out of the extended 20-man squad.

There were bursts of energy from Pierre-Emerick Aubameyang and Eddie Nketiah going forward in the first half but it was City who were more dangerous.

De Bruyne, Sterling and David Silva were all denied by Arsenal keeper Bernd Leno, who produced an impressive display, but it seemed inevitable City would move ahead when Luiz’s mistake gifted Sterling a chance from close range.

Victory for Pep Guardiola’s side means league leaders Liverpool remain six points away from winning the title – writing off any potential celebrations in Sunday’s Merseyside derby.

On an evening in which thousands tuned in to watch a new-look Premier League on their TV screens, players from both clubs used their platform to support the Black Lives Matter movement for racial equality.

All players and staff took a knee immediately before kick-off,of those at Villa Park in the earlier match, and the words ‘Black Lives Matter’ replaced players’ names on the back of their shirts.