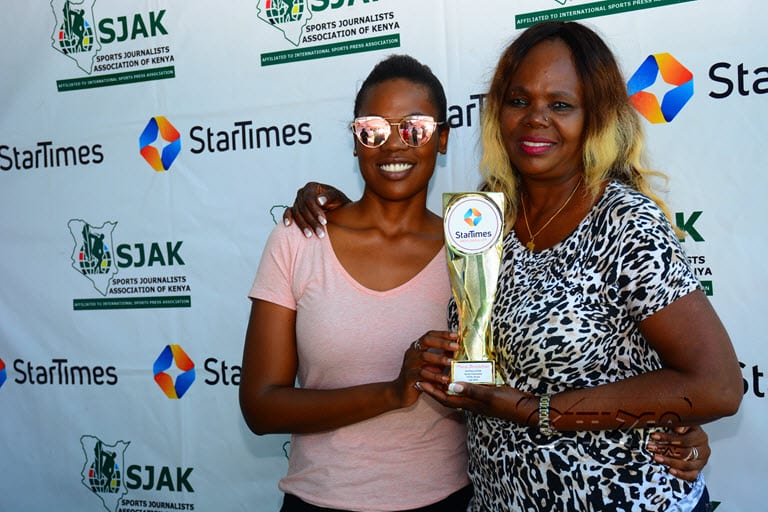 Kenyan swimmer Maria Brunhelner has been feted as the sports personality for the month of July 2018.

The German-based swimmer won the award, administered by the Sports Journalists Association of Kenya(SJAK) for her superb form at the Africa Youth Games in Algiers, Algeria where she won three medals; two gold in the 50 metres and 100 metres freestyle events and a silver  medal in the 50 metres breaststroke.

She set a championship record of 26.14 seconds in the 50 metres freestyle and repeated her feat in the 100 metres, where she posted 58.87 seconds. In the 50 metres breaststroke event, she clocked 34.04 seconds, losing out narrowly to Morocco’s Imane Houda El Barodi, who tapped the wall in 33.03

Brunhelner exploits saw her get called up to the Kenya Olympic Youth Games team held in Buenos Aires, Argentina and she also earned selection to the CANA Zone Three Championships slated for Khartoum Sudan in November.

Brunlehner was awarded with a 43 inch StarTimes Digital TV Set, Sh100, 000 in prize money, and a customised trophy.

Brunhelner edged out World U-20 champions Rhonex Kipruto and Celliphine Chespol in the vote for the coveted award.

Kipruto bagged gold in the 10,000 meters while Chespol took gold in the 3000 metres steeplechase at the World Under- 20 Championship in Finland.

Another nominee in July was Emmanuel Korir who clocked the fastest time in the two lap race this year when he registered 1:42.05 at the London Diamond League meeting.

The 18 year-old, whose awards were collected by her mother at the Mombasa Academy, was humbled with the honour, adding that it will motivate her to continue winning.

“I did not see this coming; I am excited because you guys have made my day. I am hoping to come to Kenya next year for the nationals and I have my eyes set on the 2020 Olympics in Tokyo,”         Maria said through a Skype interview from her base in Germany.

“Swimming is fun but it requires a lot of dedication but I thank my sister for always inspiring me.

StarTimes Director of Marketing and PR Mr. Japhet Akhukia, ‘In the fifteen StarTimes sports personality awards that we have handed over since we established this initiative with SJAK, it is the very first time that we are awarding a swimmer which is testament to our diversity in appreciating our sports men and women as we seek reward excellence across the diverse sports disciplines,’

The sports personality of the month award is a partnership between pay television Company StarTimes and SJAK to reward all deserving sports personalities on a monthly basis in a bid to bolster the general performance of sport in the country as well as whipping up the enthusiasm of Kenya’s sports men and women in the country.