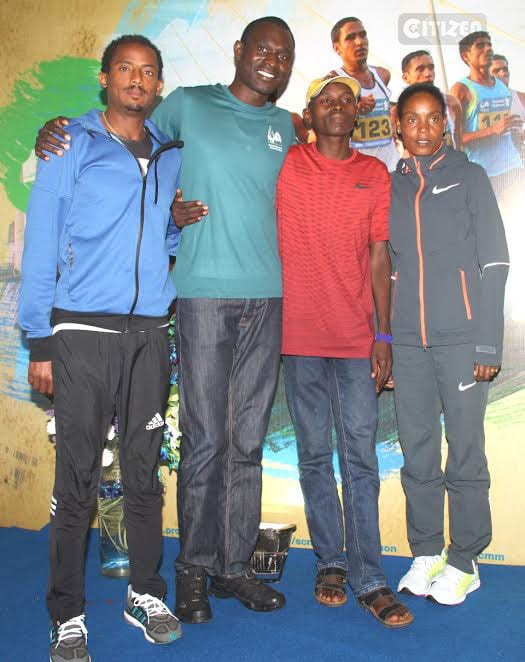 Levy Matebo knows that the spotlight has fallen on him at the Standard Chartered Mumbai Marathon 2017 after the late withdrawal of Ayele Abshero.

He and the other runners at the start will be buoyed by the presence of two-time Olympics and world 800m champion, David Rudisha, with the record holder turning up as the International Ambassador for the Race.

“Great evening of interacting with Standard Charter Bank staff in Mumbai,” Rudisha who left for India earlier this week posted on his Twitter and Instagram.

Matebo can boast of a best 2:05:16, from the 2011 Frankfurt Marathon and has run faster than Kipketer’s course record no less than four times during his career.

“I want to see the course first and then I will plan my race but yes, I am aiming for course record,” confirmed Matebo at Thursday’s press conference for the leading international runners in the 14th edition of the Standard Chartered Mumbai Marathon.

“In my last race (the Ljubljana Marathon in October) I was going for a fast time but the police car and TV van went off course about 600 metres from the finish and we followed them. I still finished third (in 2:09:37) but I was maybe two minutes slower than I could have finished so if I run under 2:08 on Sunday, I will be very happy,” he added.

Adding to Matebo’s cheery demeanour is the fact that Mumbai is in the middle of an unseasonal cold spell.

The temperatures locally are about 10 degrees Celsius lower than usual at this time of the year and during Sunday’s race they are expected to be around11-13 degrees; meaning that while Mumbai residents are gently shivering, the runners will have ideal conditions for an assault on the race record books.

Also at the press conference was Ethiopia’s Seboka Dibaba, who was second in Mumbai 12 months ago.

“My aim is to run better than last year. Last year was my first time in Mumbai so the now I know the course better,” he said, hinting that Matebo and Rio Olympic 2016 Games fifth place finisher Alphonce Simbu – perhaps the two favourites on paper – may have to still look out for an Ethiopian challenge despite the absence of Abshero.

Abshero withdrew from the race earlier this week due to a re-occurrence of a minor back injury which had caused him problems during the last few months of 2016.

The favourite for the women’s race in Mumbai looks to be Ethiopia’s Dinknesh Mekash, a two-time winner in Mumbai after having triumphed in 2014 and 2015 who has a personal best of 2:23.12, set when she finished second in the 2015 Frankfurt Marathon.

“My preparations have been going well, no problems. This is my fourth time in Mumbai (she was also second in 2013) so I know the course well now, that has to be an advantage,” reflected Mekash.

“On my previous occasions here, I heard lots of Ethiopian voices in the crowd when I was running and that was exciting and motivating,” she added.

Promoted by Procam International, the Standard Chartered Mumbai Marathon is one of the largest sporting events in Asia and India’s biggest platform for charity.

With total prize monies of $387,000 (Ksh40218975.00), the Standard Chartered Mumbai Marathon 2017, more than 42,000 runners will take to the roads in Mumbai for the five different races in what has become an annual event on the third Sunday of January.

In addition to the marathon, there is a half marathon, Dream Run (6km), Senior Citizens Race (4.3km) and Champions with Disability Race (1.75km).