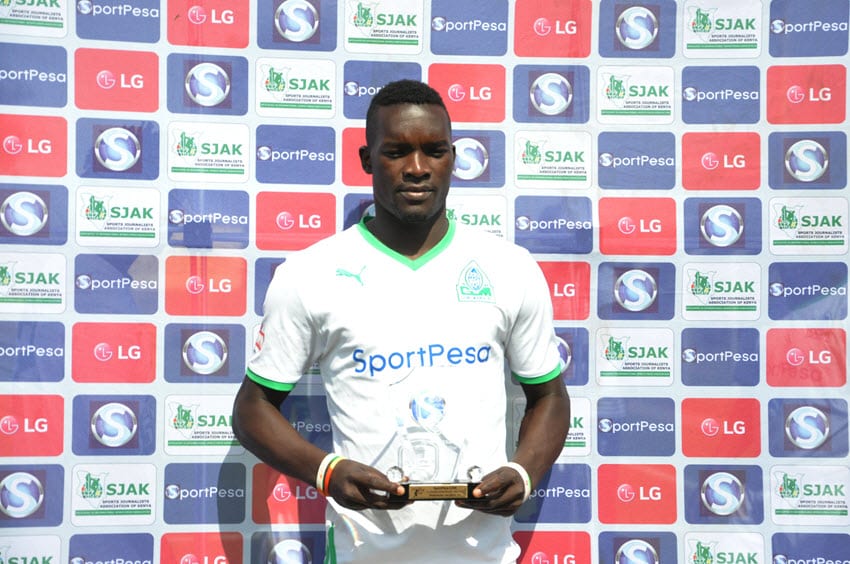 Uganda Cranes midfielder, Khalid Aucho received the best parting gift after being named the SJAK Player of the Month for May on Tuesday where he confirmed his move to Scottish giants; Glasgow Rangers was all but a ‘done deal’.

Aucho spared his best for last at K’Ogalo anchoring the team to four successive victories that saw the champions shoot to the top of the Kenyan Premier League (KPL) only to drop to fourth at the end of the first leg after being docked three points for hooliganism.

“It would be good for my career because that’s a different team and league. I’m just patient and focusing on duty at Gor Mahia. If it happens fine for me.

“I can confirm that it is upon them to make the last move as everything is done from my end,” Aucho spoke at Nairobi’s Camp Toyoyo where he was presented with the rotating accolade.

The self styled ‘bad boy’ took home a 43-inch LG smart television and Ksh100,000 besides the trophy engraved with a permanent reminder of the month he ruled the KPL.

The surprised player dedicated the award to his brother who was buried in Uganda last week.

“I didn’t expect to get the award in fact I thought it would be one of my colleagues here but I’m happy and thank God. It feels good to be recognised after working hard,” he added.

Should he complete his transfer to Ibrox, he will link with fellow ‘bad boy’, England’s Joey Barton who moved from Championship club QPR to Rangers.

The Scottish giants have won more league titles and trebles than any other club in the world, winning the league title 54 times, the Scottish Cup 33 times and the Scottish League Cup 27 times, and achieving the treble of all three in the same season seven times.

Rangers went on to win the 2015–16 Scottish Championship and automatic promotion to the Scottish Premiership, ending their four-year stint in the lower divisions.

The club also reached the 2016 Scottish Cup Final, beating Old Firm rivals Celtic in the semi-final at Hampden, before losing to Hibernian in the final.