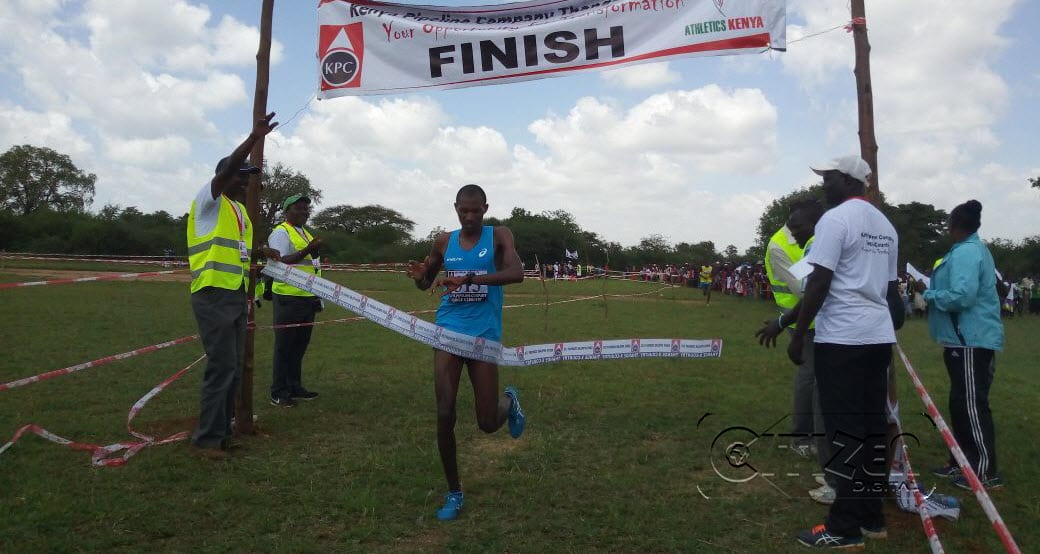 Winfred Mbithe Nzisa who was among the Kenyan team which won this year’s IAAF World Cross Country in the mixed relays in Uganda and Alex Mutiso of Makueni County are the champions of 8km and 10km of respectively of this year’s Kenya Pipeline Company Thange Cross Country second edition held at Maikuu Primary in Kibwezi East in Makueni County on Tuesday.

Mbithe who hails from Makueni County clinched the senior women 8km race clocking 23:03.2, while Mutiso who is a Japan based athlete topped the 10km charts, clocking 24:57:2.

Speaking to Citizen Digital after the win, Mbithe said that the cross country victory will boost her confidence as she eyes glory in the forth coming Commonwealth Games slated for next year in Australia.

“This, now, is the start of the good things to come, and for sure, I thank Athletics Kenya and Kenya Pipeline for organising this event which will help me prepare for the Commonwealth Games,” Mbithe remarked.

Men champions Mutiso who also finished third in the Imenti South Road race last week said the busy calendar of event is helping him before the World Cross Country trials next year.

“My target is to represent Kenya in the World Cross Country to be held in Algeria next year and I’m working hard to get that chance during the trials,” Mutiso said.

Africa Cross Country junior bronze medalist, Nancy Nzisa, settled for the second position behind Mbithe, clocking 23:07:9. Last weekend she also came second in the Imenti South Road race with a time of 57:37, behind Embu based Pauline Njeri who won the race.

According to Makau, the vice, if not curbed, will tarnish Kenya’s image. “I want to thank AK and KPC for organising this event which will help nurture our talents in the area.

“I would like to advice youths to keep away from things which will untimely end their careers, ” Makau told Citizen Digital.

The top 10 finishers in various categories walked away with cash prizes, while the winners in the senior men and women category were rewarded Sh25,000, as first and second runners-up took home Sh15,000 and Sh10,000 respectively.

The Athletics Kenya sanctioned-event which was inaugurated last year is organized in order to nurture talents in the southern region and also create a formidable relationship between the oil company and the locals.