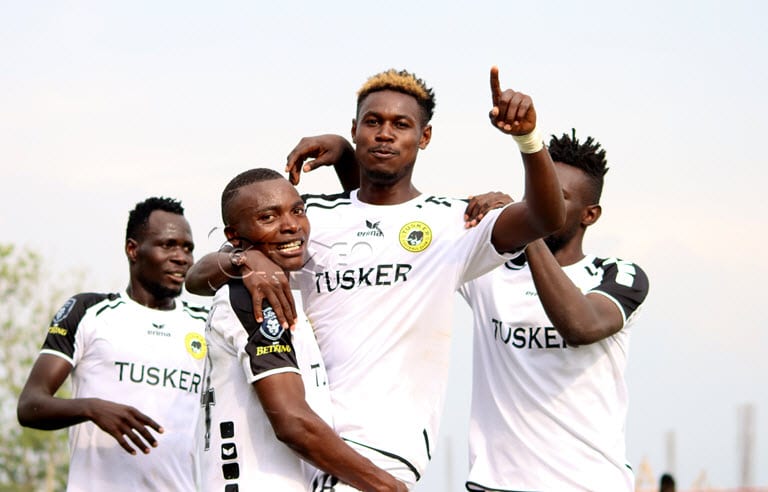 Luanda Villa put on a gallant fight but were undone by a moment’s attacking quality from Tusker FC who won 1-0 in Ruaraka to advance to the FKF Cup quarter-finals.

Henry Meja’s first half goal proved just enough for Tusker to dispatch the visitors who were unable to salvage the tie despite a relentless late surge.

Luanda pinned Tusker in their own third for most of the second half but lacked the telling touch in the end, with Eugene Asike thwarting any danger thrown at the home defence.

In contrast, Tusker created the more quality chances every time they broke away on the counter, hitting the crossbar thrice in the final 20 minutes.

Tusker head coach Robert Matano could potentially be reunited with his former side AFC Leopards who face Bungoma Superstars on Sunday with the winner set to be paired with the Brewers in the quarters.

Tusker have made a solid start to their FKF Premier League campaign and currently top the standing s, with victory against Luanda ensuring they stayed on course for league and cup double.

There were two other round of 16 matches on the day with Division One side Equity Bank edging Vegpro 2-1 at the Thika Municipal Stadium and Bidco United defeated Egerton University 1-0 later at the same venue.

In Ruaraka, Luanda enjoyed a brilliant opening but fell behind when Humphrey Mieno squeezed a clever ball through the defence and Meja arrived in behind to place a cushioned finish into the back of the net.

Matano’s charges held their advantage into the restart and should have doubled it when Boniface Muchiri created space for himself after beating two men only to scoop the ball over the bar.

Tusker threatened again through Kevin Okoth who found himself needing to beat just one defender to open up a one-on-one chance with the goalkeeper for himself.

The defender, Paul Munala, narrowed the angle on him and got the block after Okoth elected to shoot when he had Michael Namanda and Meja on either sides begging to help him.

The tide shifted in Luanda’s favour and Matano made three substitutions at once with midfielder Jackson Macharia among those coming on but the hosts struggled to regain control.

A hopeful long ball from Luanda found Felix Okik in a promising positing but the forward rushed his effort, attempting an unsuccessful flicked header when he had time to control it and finish.

Goalkeeper Robert Mboya gathered it and set his side off, with a steady build up ending with Brian Marita’s long range effort kissing the top of the crossbar.

Meja blasted a ferocious shot against the crossbar and Chrispinus Onyango saw a headed effort come off the bar from a corner kick as Tusker came within inches of burying the tie.

Luanda had a final opportunity to level matters after a lay off was neatly placed for Andrew Omulama but the midfielder failed to trouble Mboya who watched it sail harmlessly over the bar.