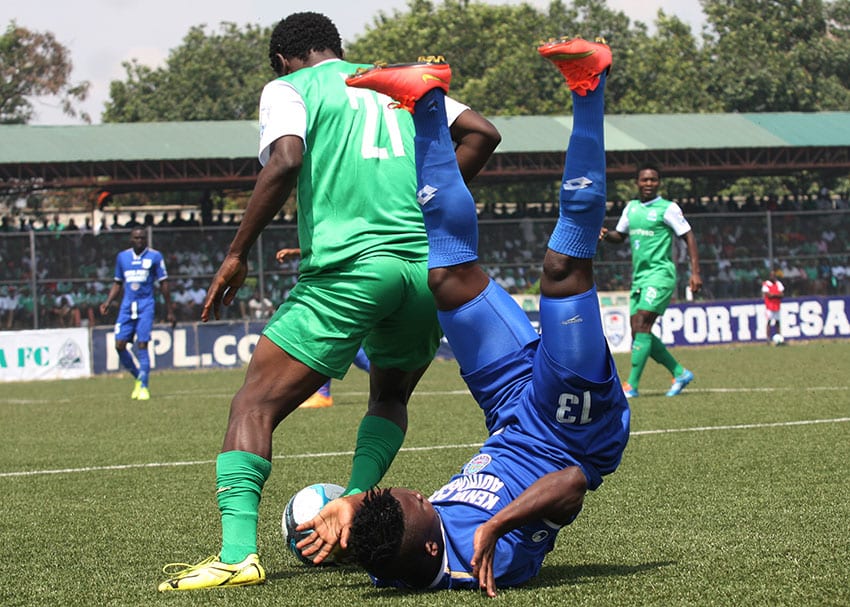 Champions Gor Mahia failed to bridge the gap at the top of the Kenyan Premier League (KPL) summit to two points of leaders Tusker FC after being forced to a disappointing 0-0 draw by visiting Bandari FC at Moi Stadium Kisumu on Sunday.

It was the fourth draw in five outings for K’Ogalo who now trail the Brewers who beat Mathare United 2-0 on Saturday by four points.

In Kisumu, Godfrey Walusimbi started for the first time since the mid season break with Meddie Kagere dropping to the bench as the Brazilian tactician Marcelo ‘Ze Maria’ Fereira sought a remedy for his misfiring side.

The champions would be having a good view from the top had they not dropped eight points in the second leg.

Bandari on the other hand welcomed back goalkeeper Wilson Obungu who had served out his red card induced one-match ban and almost stunned the champions when their former crowd favourite, Dan Sserunkuma, came within inches of finding a winner late on.

Before the game, Ze Maria acknowledged that Kagere and top scorer, Jacques Tuyisenge had not found their stride as strike partners

“The two strikers have the same qualities and it’s not easy playing together. That’s why I have brought in George ‘Blackberry’ Odhiambo into the equation,” he explained.

His opposite number, Ken Odhiambo expressed his satisfaction in the way his players approached the game and told them to give much of the same in upcoming matches.

“We had one genuine chance to get the three points but Dan was unlucky not to convert, it’s time to go back to the drawing board as my boys have performed to the best of their ability.

“Playing five crucial games in a period of two weeks is not an easy task,” the tactician underscored.

The stalemate left K’ Ogalo on 36 points while Bandari broke into the top 10.

The champions controlled most of the proceedings but could not account for the greater share of possession as their attack struggled again.

Gor started the game brightly almost going ahead in the second minute when Francis Kahata found himself in acres of space outside the opposition’s six-yard box but opted to shoot directly at Obungu.

Kahata was once again the culprit eight minutes later when he squandered another glorious chance to open the scoring after Odhiambo set him up with his feeble shot drifting annoyingly wide.

The defending champions had another bite of the cherry five minutes past the half hour mark Burundian international Karim Nizigiyimana floated a cross into the box that found top scorer Tuyisenge but his header flew wide.

The Dockers came close one minute to the break when an improvised short corner routine almost found Boniface Oluoch off guard with former AFC Leopards midfielder Anthony Kimani failing to find the target.

After the breather, Gor fans expressed their dissatisfaction with the toothless attack constantly calling for the introduction of Kagere from the stands.

Odhiambo responded by sending in Michael Apudo, who had scored for the coast-based club in their previous two games from the bench, for Kimani but it was the record KPL champions who continued creating the better chances.

Oketch, the former Western Stima front man took aim at goal but was denied by Obungu who had a busy day between in between the sticks.

With 20 minutes of the game to go, Ze Maria decided to go for an all out attack sacrificing Ernest Wendo for an additional striker in Kagere.

But it was the 2014 KPL Player of the Year and former Gor top scorer, Sserunkuma, who came the closest in the dying stages when his diagonal shot inside the box whizzed past K’Ogalo’s goal missing the far post by inches.

In the bottom table clash, Sofapaka ran riot over Nairobi City Stars to trim the gap between them to a single point in a result that left them 10 adrift of safety.

Enoch Okwil opened the floodgates in the 11th before Jafar Gichuki made it 2-0 in the 38th as the 2009 champions went to the break with the healthy advantage.

Veteran defender Noah Abich struck the third at the hour mark before Moses Odhiambo and Isaac Mutanga rounded the thrashing in the 82nd and 85th minutes of the encounter for their biggest win of the season.

A goal in stoppage time from Jared Obwoge gave Chemelil a morale boosting victory over rivals Muhoroni that lifted the sugar millers to sixth on 30 with their neighbours sliding to eighth a point behind.

Onwudi Chibueze was once again on target for resurgent Thika to salvage a point when he struck in the 31st to cancel out Andrew Murunga opener for Homeboyz in the 23rd.

Thika remain 13th on 23 as Homeboyz slipped to seventh.