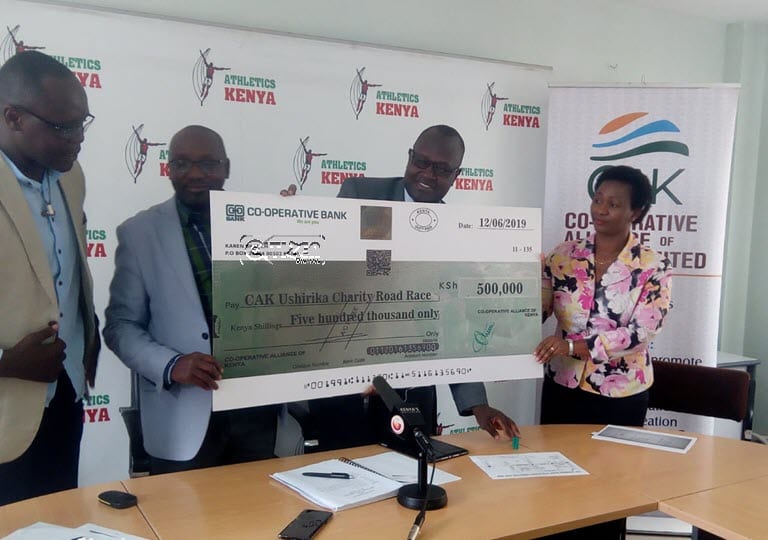 Mneria will be competing in the race just a few days after qualifying for the All African Games after coming third in the National Trials held a week ago in Kasarani.

Prior to the trials, Mneria had clinched a silver medal in half marathon at the just concluded Africa Beach Games held in Sal, Cape Verde Island.

Mutai will be making her first competitive track return since representing Kenya in the senior team at the World Cross Country Championships in Aarhus, Denmark.

The CAK  Chief Operating Officer Steve Otieno says the race is aimed at raising fund to assist needy students with the organisation having set a Sh50 million target.

“We are happy to have received this kind of sponsorship today which will go a long way in supporting our course. We will continue working towards realising our dream of helping a needy student which this race is premised on,” Otieno said.

Two weeks after the launch of the race, the organisers today received a major shot in the arm after attracting a sponsorship of close to Sh2million from various organizations and companies including; Safaricom, Safaricom Sacco, Police Sacco,  Kenya Union of Savings and Credit Cooperatives Ltd (KUSSCO),  African Confederations of Cooperative Savings and Credit Association (ACOSCA) , and CIC insurance.

The 2011 Gold Coast marathon champion Nicholas Kamakya has also confirmed his participation in the elite race.

“Many elite athletes have shown interest in this race and we expect that even more may still turn up for the event,” said Dominic Ondieki a representative from Athletics Kenya.

Other races to be held Sunday are; 7km, 5km CEO’S run, and 2km race for children.

The winners in the elite race will pocket sh100,000 in both men and women categories.

All races will start and end at the Uhuru Park with the event set to kick off at 6.30am with some of the roads in the capital to be affected including; Uhuru Highway, Moi Avenue, Haille Selassie Avenue and Aerodrome road.