Muguna: We are ready to fight for league title after Cup win 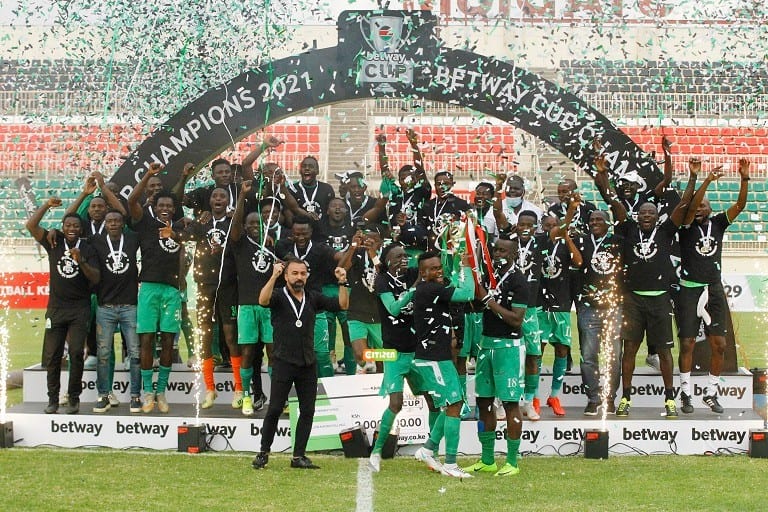 Gor Mahia may have lost the prestigious CAF Champions League ticket to Tusker but the fierce battle for the league title is still on, and in accelerated gear.

The Football Kenya Federation Premier League (FKF-PL) defending champions who lifted the FKF Cup on Sunday after beating AFC Leopards 4-1 on penalty are keen to cut the Brewers eight-point gap at the top.

Gor Mahia midfield maestro Kenneth Muguna has issued a warning to league leaders Tusker, KCB and AFC Leopards to brace for a tough duel in the race for the league title.

Muguna has noted that his teammates have the energy and capability to correct their slow-start to finish strongly.

According to the former K’Ogalo captain, his colleagues have the gas and wouldn’t give up.

“I think it means a lot, it means that this club has players who don’t give up no matter how things are. This one (FKF Cup trophy) first of all is a booster to us and right now I think everyone will be in high spirits.

“We know the league is very tight and it’s not only Tusker, there is still KCB and AFC Leopards who are ahead of us and we have to make sure that these guys are behind us and it will not be easy but we are ready for it,”  Muguna submitted.

The league is now in round 22 which translates to only 10 matches remaining to complete the 2020-2021 season.

After beating Leopards on Sunday to lift the FKF Cup, Muguna says it’s a full cycle of trophies having bagged the league title with the defending champions as well as the Super Cup.

“I think since I started playing in the Kenyan Premier League this was the only trophy that was missing in my cabinet and finally it’s home and I am very happy for my team, for the coach and for the club because it has been a very tough season,” Muguna noted.

Gor are fourth on the log with 39 points from 22 matches, eight points shy of leaders Tusker while KCB and AFC Leopards are second and third respectively with 46 and 40 points respectively