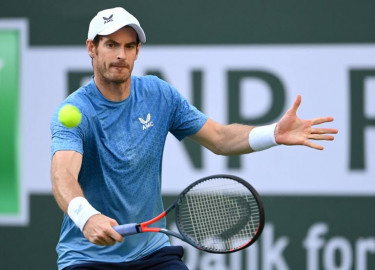 Murray cruised to the first set in 23 minutes but any hopes of a routine win disappeared as Basilashvili recovered.

Britain's Andy Murray marked his return to the Australian Open - where in 2019 he thought he might have to retire - with a tense five-set win over Georgian 21st seed Nikoloz Basilashvili.

Murray cruised to the first set in 23 minutes but any hopes of a routine win disappeared as Basilashvili recovered.

Murray, 34, was one of three Britons to win today, with Heather Watson and Dan Evans also progressing.

Murray, a five-time beaten finalist in Melbourne, will play Japanese qualifier Taro Daniel in the second round on Thursday.

"It's amazing," Murray said shortly after winning on John Cain Arena, where he lost to Spain's Roberto Bautista Agut in 2019.

"It's been a tough three or four years but I've put in a lot of hard work to get here.

"I've played on this court many times and the atmosphere is always incredible.

"It is where I thought I had potentially played my last match but to win a five-set battle like that, I couldn't have asked any more."

Three years ago at Melbourne Park, Murray caught everyone by surprise by announcing in tears that he feared his illustrious career was coming to an end.

The hip injury that had plagued him since the summer of 2017 was debilitating and the only option left was resurfacing surgery that saw metal inserted into the joint.

No player has returned to the singles game after that operation - but Murray did later that year.

On Tuesday he played on the same court where a retirement video - featuring messages from his peers including Roger Federer and Serena Williams - was infamously and prematurely played after he was beaten by Bautista Agut.

Another niggling injury stopped Murray going to Melbourne Park in 2020 and last year his hopes were scuppered when a positive test for coronavirus stopped him flying out.

The venue's title has changed - renamed from Melbourne Arena in honour of the former Victorian Prime Minister - and the atmosphere was different, with only 50% capacity allowed because of coronavirus restrictions.

But the fluctuations of the match - and the associated tension for Murray fans - remained.