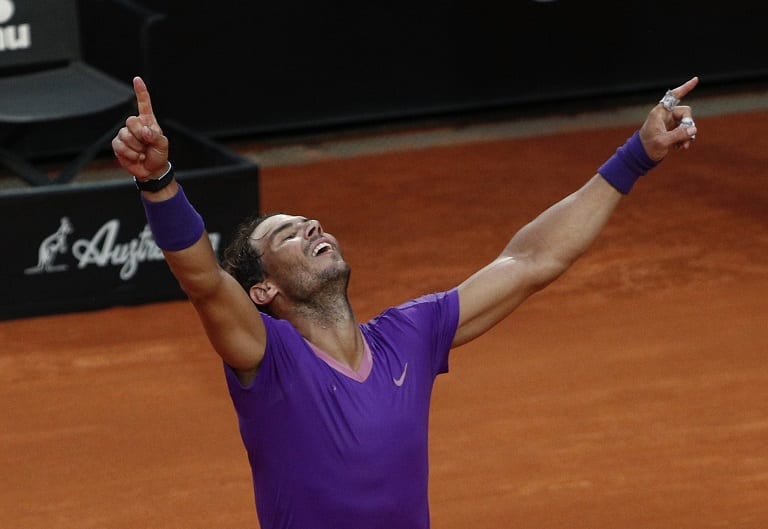 Rafael Nadal will face top seed Novak Djokovic in the French Open semi-finals after the Spanish 13-time champion outlasted Diego Schwartzman in a tricky battle in front of 5,000 fans in Paris.

Serbia’s Djokovic faces Nadal, in a re-run of last year’s final, on Friday.

After reaching a record-extending 14th French Open semi-final with his 105th win in 107 matches at Roland Garros, Nadal said: “The numbers are just amazing. But I can’t think about that now, honestly. Let’s talk about that when I finish my career.

“Now is a moment to be happy. I won an important match today against a tough opponent. I was able to find a way to play my best tennis in the moment that I really needed.”

Up to 5,000 spectators were allowed on Chatrier after France’s coronavirus restrictions were loosened on Wednesday, providing an increased buzz as Schwartzman looked to create an upset at the place where Nadal has dominated since 2005.

Even though Nadal cruised through the fourth set, it was a far from straightforward afternoon for the Spanish left-hander.

After serving out the opener for his 36th successive winning set at Roland Garros, most would have backed Nadal to complete another three-set win to equal his personal record of 38 in a row.

But there was a twist. Schwartzman, playing with aggression and without fear, levelled at one-set all and became the first player to take a set off Nadal at Roland Garros since the 2019 final.

“Losing sets is something I accept well. The thing that matters is how you recover from a set lost.”

Schwartzman continued to cause problems and, for a short while in a tense third set, it looked like the Argentine could achieve an even rarer feat: leading Nadal by two sets to one on the Paris clay.

The last time that had happened was back in 2011 when Nadal trailed John Isner in the first round before recovering to win in five sets.

Schwartzman looked more comfortable on serve than his opponent, with Nadal showing a few signs of uncertainty.

Then, from 4-4 in the third set, Nadal suddenly upped his level to leave Schwartzman reeling and swing the match back in his favour.

Nadal broke for 5-4 and served out to edge ahead, then dropped just five points in a one-sided fourth set as Schwartzman – now sapped of energy and belief – wilted.

“I was in a tricky situation, 4-3 for him in the third set, one set all. That was the moment to calm myself, to think about the things that I was doing well in practice,” said Nadal.

“It was a tough moment. I’m very proud that from this moment I played probably my best level of tennis until the end of the match, with not many mistakes.”