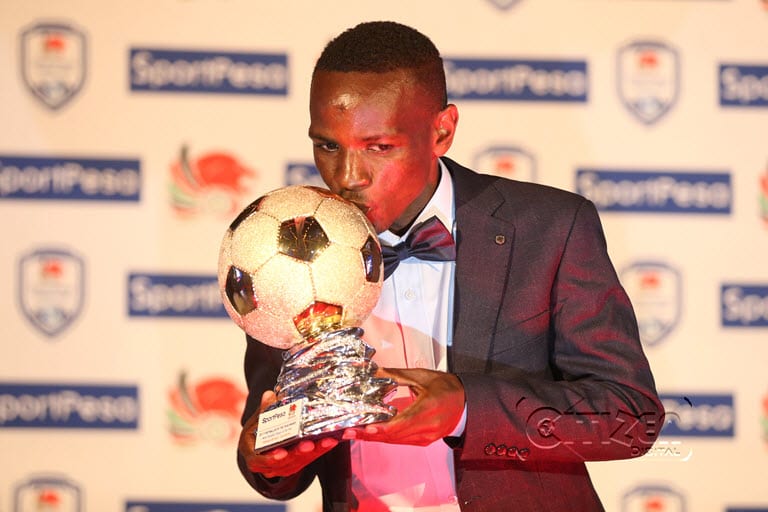 To the surprise of many, Madoya, whose debut season with Zoo was tumultuous at a point the club being stopped through a court order from participating in the topflight, bore him all the glory past well established ‘stars’ from big clubs.

Not even the new KPL MVP expected the multiple awards, acknowledging he was surprised too.

“I do not doubt my capability, but I did not expect all this. Glory to God, and a big thank you to my teammates, coach, fans and the entire Zoo family for the support,” a jubilant Madoya said.

Madoya, whose total prize money from the four awards was Ksh. 1.7 million, beat Nzoia Sugar’s Lawrence Juma and former Tusker FC’s Humphrey Mieno to the midfielder of the year award in that sequence, while Gor’s Meddie Kagere and Chemelil Sugar’s John Mwita played second and third to him in the Fairplay Player of the Year.

Harambee Stars and Posta Rangers goalkeeper Patrick Matasi was the only man who retained his 2016 award, beating Kariobangi Sharks’ John Oyemba and Kakamega Homeboyz shot-stopper David Juma to the Golden Glove (Goalkeeper of the Year). He was pivotal in guiding Posta Rangers to finish fourth on the KPL log.

William Muluya, who guided Sharks to a third-place finish in their debut season in KPL won the Coach of the Year Award, while Jolawi Obondo (Gor Mahia) carried home the Team Manager of the Year gong. Muluya, a former Mathare United Team Manager, was voted best ahead of Ugandan Sam Ssimbwa of Sofapaka FC and Homeboyz’s Mike Mururi in that order.

For the TM category, Evans Kadenge of Nzoia and Christopher Ouma of Ulinzi settled for second and third places.

The Chairman’s Lifetime Award went to Frank Okoth, as Sofapaka won the Fairplay Club of the Year Award ahead of Western Stima and Nzoia.

Referee of the Year Award went to Badr Yassin who beat veterans Davies Omweno and Anthony Ogwayo, while that of Assistant Referee of the Year went to Aden Marwa. Gilbert Cheruiyot and Carolyne Kiles followed in second and third positions.

Goalkeeper of the Year – Patrick Matasi

Defender of the Year – George Owino

Midfielder of the Year – Michael Madoya

Coach of the Year – William Muluya

Fairplay Club of the Year -Sofapaka