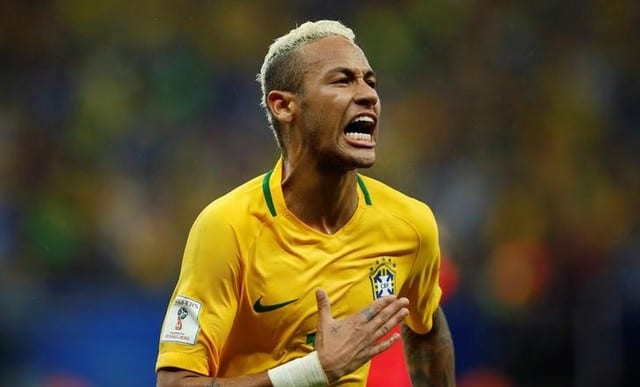 Neymar’s second-half goal gave Brazil a 2-1 victory over Colombia on Tuesday as the five-times world champions registered their second consecutive win to take the second place in the South American qualifying group for Russia 2018.

The home side got the perfect start when Miranda rose after just 80 seconds to head home a corner and score his first goal in 33 appearances for the national side.

Brazil, playing just their second game under new coach Tite, dominated the first half with a high-pace pressing game but struggled to make clear cut chances and paid the price in 35 minutes when Colombia equalised against the run of play.

James Rodriguez floated in a free kick from 35 yards out and Brazilian defender Marquinhos headed the ball into his own net.

Neymar took a pass just inside the box with 73 minutes gone and his angled drive was well placed into the far corner to beat Colombian goalkeeper David Ospina. It was his 48th goal in 72 international games and takes the Barcelona striker equal to Zico on Brazil’s all-time goal-scoring list.

The result in the humid heat of Manaus marked the first time that Brazil have won two consecutive games in what has until now been a stuttering qualifying campaign.

“We’ve been very consistent the last two games,” said goalkeeper Allison. “We’ve become tougher and we deserve congratulations for taking the lead again after the pegged us back. We reacted well.”The result lifts Brazil to 15 points, ahead of Argentina, who came from behind to draw 2-2 against bottom-placed team Venezuela, on goal difference.

Colombia sit two points behind them in fourth place in the 10-team South American group. Uruguay, who beat Paraguay 4-0 earlier in the evening, top the table with 16 points.Ecuador remain in fifth after going down 2-1 to Peru in Lima.

A penalty from Christian Cueva for the home side after 20 minutes was cancelled out by Gabriel Achilier 10 minutes later but Renato Tapia got his first international goal 12 minutes from time to give Peru only their second win in eight games.Chile could only draw 0-0 with Bolivia and sit in seventh place in the 10-team table.

The top four qualify automatically for Russia 2018 and the fifth place side goes into an intercontinental play off with a team from Oceania.

Switzerland struck twice in quick succession to stun Euro 2016 champions Portugal 2-0 in a World Cup qualifier on Tuesday and hand them a first competitive defeat in two years under coach Fernando Santos.

Portugal, missing talismanic forward and record scorer Cristiano Ronaldo, regained their composure and dominated the rest of the game but were hopelessly ineffective in attack.

Nani was the biggest culprit when he headed Ricardo Quaresma’s cross against the post from close range in the 82nd minute.

The Portuguese had 27 attempts on goal to Switzerland’s eight but only four were on target. They had 12 efforts blocked and 11 went wide while they also won 11 corners to one for the hosts.

Santos was appointed coach in September 2014 and had not lost in 14 competitive games, seven in Euro 2016 qualifiers and seven in the tournament itself.

Swiss midfielder Granit Xhaka was sent off for a second bookable offence in stoppage time as tempers flared.

“In the first 20 minutes, the Swiss were completely over-run but they scored a goal and from then on, used the tactics that Portugal often use and defended well,” Santos told reporters.

“Our opponents were more pragmatic and more efficient.”

In addition to Ronaldo, still recovering from the injury he suffered in the Euro 2106 final, Portugal were missing key midfielder Renato Sanches while the Swiss were without their top forward, Xherdan Shaqiri.

The visitors looked comfortable until Switzerland won a free kick in the 23rd minute.

Ricardo Rodriguez produced a fierce effort which goalkeeper Rui Patricio could only parry and Cameroon-born Embolo nipped in to score from the rebound.

Portugal were still recovering from that shock when Haris Seferovic got free on the right six minutes later and cut the ball back into the middle of the area where Mehmedi, unmarked, placed his shot into the far corner.

Portugal brought on Joao Mario and Andre Silva at halftime and continued to press forward but a series of shots went either over the bar and were fired at Swiss defenders.

Bernardo Silva had a scuffed shot easily saved by Yann Sommer and Raphael Guerreiro sent another over.

Portugal continued to dominate until the end when Quaresma had a shot deflected over the crossbar and Joao Mario fired into the side netting.