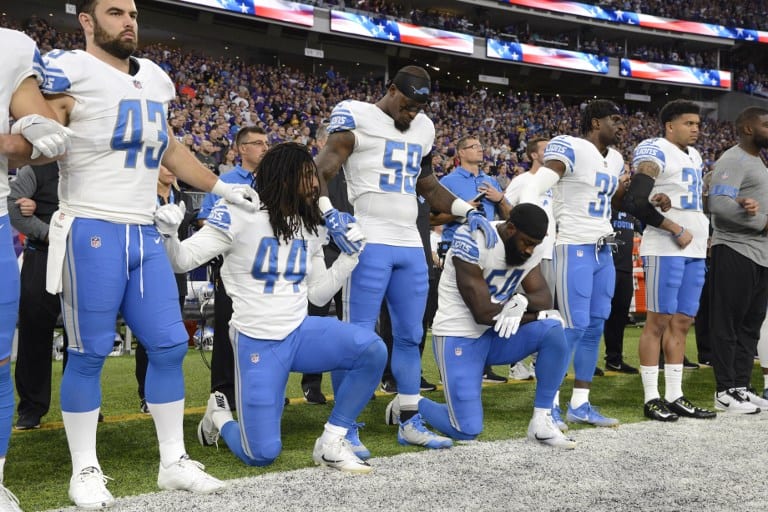 NFL players protested during the US national anthem for a second straight week on Sunday, ignoring a fresh demand from President Donald Trump to stand for the playing of The Star-Spangled Banner.

A week after an unprecedented wave of racially-charged protests by players, smaller, scattered demonstrations could be seen as early games kicked off.

Three members of the Miami Dolphins team were the first to take a knee during the anthem ahead of their team’s game against the New Orleans Saints at Wembley in London.

A handful of Buffalo Bills players could be seen kneeling for the anthem ahead of their game against the Atlanta Falcons.

Two Detroit Lions players took to one knee for the anthem before the game against the Minnesota Vikings in Minneapolis.

But there appeared to be no protests in several other other games, including the New England Patriots’ clash with the Carolina Panthers and the Dallas Cowboys home game with the Los Angeles Rams.

In Baltimore, Ravens fans booed their team as they took to one knee for a “moment of unity” ahead of their game against Pittsburgh. Both the Ravens and the Steelers players stood for the anthem.

Trump angered NFL stars, team owners and league officials on September 22 after describing players who had protested against racial injustice by refusing to stand for the anthem as “sons of bitches.”

More than 150 players across the league kneeled or sat down during the playing of the anthem last week.

The move drew criticism from Trump and fans, with accusations that the protesting players were disrespecting the national anthem and the US military.

On Saturday, Trump again raised the issue on Twitter, demanding players stand for the anthem.

“Very important that NFL players STAND tomorrow, and always, for the playing of our National Anthem. Respect our Flag and our Country!” Trump wrote.

US live television coverage of the Dolphins-Saints game on the Fox Sports network showed only one, fleeting wide-angle image of the kneeling Dolphins players.

Fox Sports had earlier said the London game would be the only fixture this weekend where live coverage of the anthems would be broadcast.

“As we have in previous broadcasts of NFL games from London, Fox will show the National Anthem as well as God Save the Queen live,” Fox said in a statement.

“As is standard procedure, regionalized coverage of NFL game airing on FOX this Sunday will not show the National Anthem live; however, our cameras are always rolling and we will document the response of players and coaches on the field,” the network told Sports Illustrated.