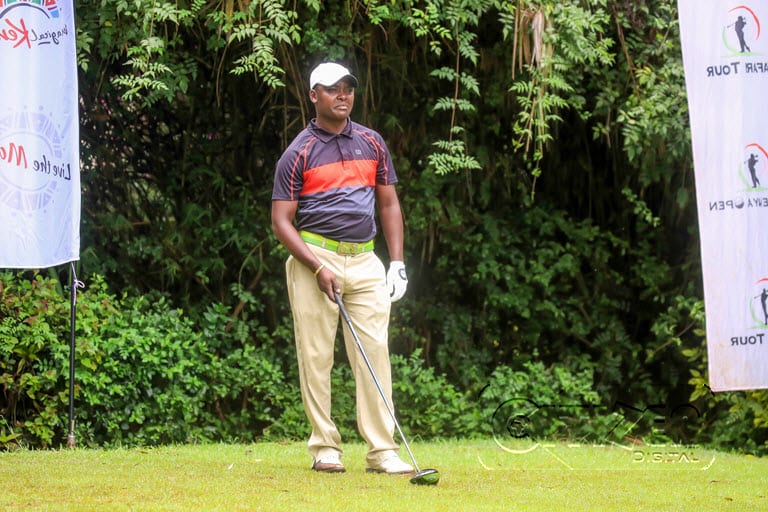 Thika Golf Club’s Simon Ngige, kept his rich vein of form going at the Royal Nairobi Golf Club, following up his impressive round one score of 3-under par, with a one-under par, 71 in round two, to take a five shot lead on a gross score of 4-under par, 140, heading into the penultimate round of the tournament.

The joint overnight leader started his round with a bogey on the par-4 first, before settling with back to back pars then recovering with a birdie on the fourth. A further birdie on the par-5 seventh saw him card a turning score of one under par, 35. Ngige staggered through the back nine, hitting bogeys on the 11th, 14th and 18th coupled by birdies on the 13th, 15th and 16th, while holding par through the rest of the holes, to finish the round on 1-under par, 71.

The round however belonged to Uganda’s Brian Toolit, who played a tournament leading score of 4-under par, 68. The Jinja Golf Club professional, hit a total of five birdies and one eagle, but was hard done by three bogeys on the sixth, twelfth and sixteenth. Despite his efforts Brian failed to make the CUT, which was set at 7 over par, having played an opening round of 12 over par, to take his gross score at 8 over par.

A total of 21 players, including one amateur, made the cut to play in the third and fourth rounds, including Dismas Indiza (+3), Rizwan Charania (+5) and amateur Daniel Nduva (+2).

Round three action tees off at 8:30am, with the professionals aiming for a stake of the Sh1 million prize kitty.