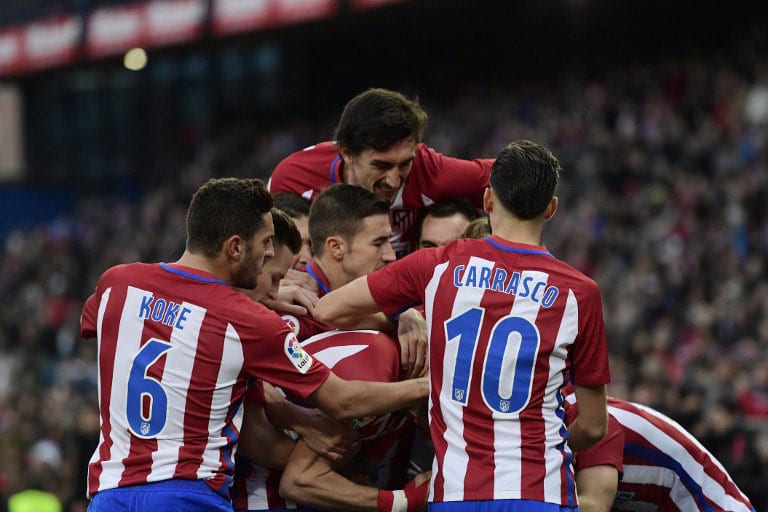 A stunning 25-yard strike from Saul Niguez snapped Atletico Madrid’s three-game winless streak with a nervy 1-0 win over Las Palmas on Saturday to move up to fifth in La Liga.

Atletico started the day 12 points adrift of leaders Real Madrid after a run of four defeats in seven league games.

However, Niguez’s brilliant hit just before the hour mark brought some blessed relief to the Vicente Calderon as Atletico ensured they will end the year just a point off the top four.

And coach Diego Simeone insisted Atletico have had another fantastic 12 months despite their inconsistent start to the league season and losing in the Champions League final to bitter rivals Real on penalties in May.

“Taking into account where we have come from, we have ended an extraordinary year,” said Simeone.

“I think any fan of Atletico Madrid has to be proud of a fantastic year and we finished it off with a very solid performance.”

Niguez also had the best effort of a bright start from the hosts as he volleyed off the inside of the post on 15 minutes.

Atletico’s struggles have coincided with Antoine Griezmann’s loss of form as the Frenchman, who finished third in the running for the Ballon d’Or this week, was held scoreless for a ninth consecutive league game.

Griezmann’s strike partner Kevin Gameiro didn’t fare much better as he passed up a huge chance when trying to square for Griezmann moments later and then fired wide from point-blank range at the near post.

Las Palmas dominated possession throughout with their neat short-passing but the closest they came to breaking the deadlock before half-time was an outrageous hit from fully 40 yards by centre-back Mauricio Lemos that came back off the crossbar.

The game swung in two moments at either end just two minutes apart at the start of the second-half.

Firstly, Atletico ‘keeper Miguel Angel Moya made a vital save from Roque Mesa on his first La Liga start of the season in the absence of the injured Jan Oblak.

Niguez then pounced on a loose ball at the edge of the Las Palmas area to curl home his first league goal of the season.

Moya was called into action again three minutes from time to parry Marko Livaja, but Atletico held out for a crucial three points.

Fresh from a 2-0 win over Atletico on Monday, Villarreal remain a point ahead of last season’s Champions League finalists thanks to a 3-1 win at Sporting Gijon.

Defeat for Sporting also ensures that Valencia will end the year outside the relegation zone on goal difference.

Sevilla can leapfrog Barcelona into second place with victory at home to Malaga later on Saturday.

Barca aren’t in action until Sunday when they host Espanyol in the Catalan derby.

Real Madrid are not in league action this weekend as they face Kashima Antlers in the Club World Cup final in Yokohama, Japan, on Sunday.