Now back to full health, Cheptegei excited to see what 2019 brings 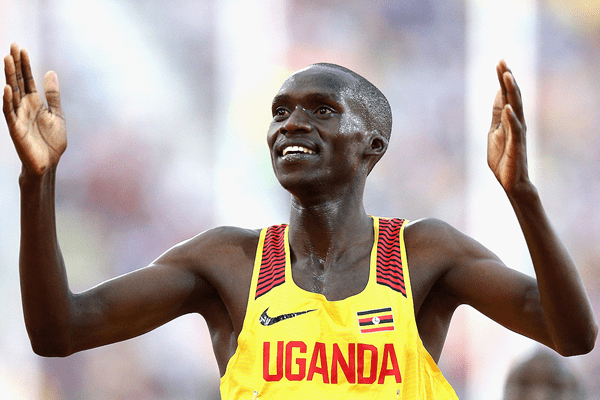 If 2018 has revealed anything about Joshua Cheptegei – besides an unerring ability to deliver his primary goals – it is his unshakeable belief and mental toughness.

A winner of 5000m and 10,000m titles at the Commonwealth Games in April coupled with his resounding world best for 15km last weekend provides the lithe Ugandan a treasure trove of memories upon which to reflect.

Yet what many may not realise is that much of Cheptegei’s success in 2018 has been under an injury cloud, which makes the achievements of the Kapchorwa-based athlete even more impressive and must leave many of his rivals running for cover during a 2019 campaign highlighted by the IAAF World Cross Country Championships in Aarhus and the IAAF World Athletics Championships in Doha.

“My coach (Addy Ruiter) and I plot out a clear picture of all our goals,” explains Cheptegei, who celebrated his 22nd birthday in September. “It starts with good training, good preparation and having a positive mentality.”

Memorably, in front of his passionate home fans in Kampala, the Ugandan raced into a sizeable lead at the World Cross Country Championships last year only to misjudge his effort and fade dramatically over the final two kilometres, eventually finishing 30th.

Refusing to be broken, he returned to his training base determined to avoid such a fate in future. Five months later, he rebounded from the disappointment to earn 10,000m silver behind Mo Farah at the World Championships in a personal best of 26:49.94.

Yet it is an incident a couple of weeks after his success in London which was to prove the source of his near 12-month-long injury issues.

Carrying a jug of water at the family home he shares with wife, Carol, and his young son, Jethan (born in June 2017), he banged his right knee on the edge of the door. Although initially only side-lining him for 10 days, the problem remained a nagging concern. 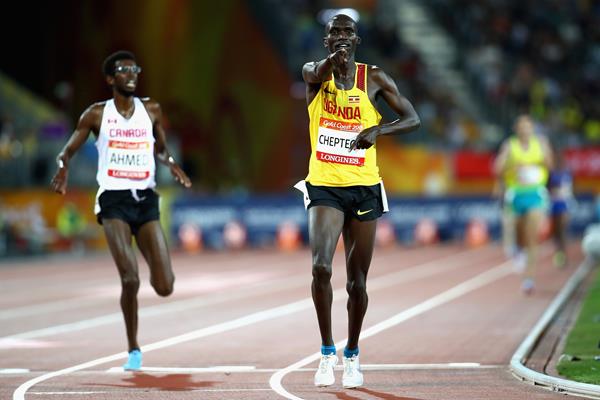 “It didn’t stop me from training but it meant I was having problems on the downhill during hill sessions,” he explains.

Despite this, last November he claimed a hat-trick of wins in the 15km Seven Hills race in Nijmegen, where a combination of erratic pace-making and windy conditions denied him Leonard Komon’s world best of 41:13 by an agonising four seconds.

“It was a really big disappointment to miss the mark by three seconds,” he says. “I felt bad I couldn’t make it happen last year.”

In January his injury concerns mounted after he twisted his left foot during a training session and this put additional pressure on his right knee.

The combined issues further hampered his build up to the Commonwealth Games. But, revealing an emphatic indication of his ability, Cheptegei delivered in Australia, becoming only the second man in history to complete the men’s 5000m and 10,000m double at a Commonwealth Games after his compatriot Moses Kipsiro.

“It gave me a lot of motivation and confidence and it showed to me that if I am in great shape, I can really do something at an Olympic Games or World Championships,” says Cheptegei, a former literature student and son of a maths teacher. “It made me believe even more.”

Yet there was a price to pay. The strain of competing in two events in Gold Coast proved too much for his brittle right knee, which became badly inflamed. This forced Cheptegei to take two months on the side-lines throughout May and June.

“It was a challenging period,” explains Cheptegei, who only returned to training in July following an intensive period of physiotherapy. ”But I tried to keep a positive mentality.”

Described by his manager Jurrie van der Velden as possessing great intelligence combined with a “western way of thinking”, the Dutchman believes Cheptegei’s characteristics have proved a key part of his success. 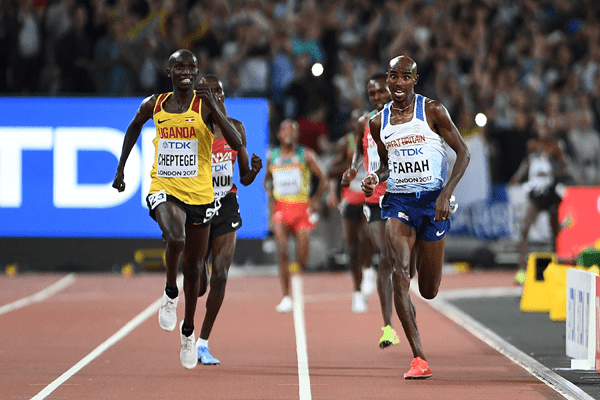 “The combination makes him easier to coach and makes him understand better why certain steps are important for his development both as an athlete and a human being,” says Van Der Velden. “He takes advice and has a likeable character which the media and general public can easily take to.”

Training in the hilly and high-altitude Kapchorwa region and twice a week honing his speed on the plateau below proved the perfect recipe for tacking the unique demands of the Seven Hills.

An impressive 10km national record of 27:16 – achieved when winning the CitySurfRun in Durban in October – coupled with several of the best tempo runs of his life convinced him and Ruiter he was in shape to attack the world best at Seven Hills. “I just needed to get it done,” he says matter-of-factly.

The conditions were near perfect but the early pace-making wasn’t as Cheptegei was led through the first five kilometres in 14:07, seven seconds behind schedule. A second five-kilometre section of 13:42 still left him about 10 seconds behind where he wanted to be, but he refused to panic and stepped on the after burners in the final third of the race, which he covered in a stunning 13:16.

“At 10km I really started to push on and at 12km I said to myself ‘this is the making of the race’,” he explains. “I still had good energy and then at 13km, when I was six seconds up on the world best, I thought ‘if I can maintain my pace, I have got it’.”

Crossing the line in 41:05 – eight seconds under Komon’s eight-year-old world best – earned the Ugandan a fourth successive Seven Hills victory in a race he has come to own in recent times.

“It was an unbelievable, happy moment for me,” says the man fondly referred to as ‘The Chairman’ by his training group, which also includes Stella Chesang, the women’s Seven Hills victor and Commonwealth 10,000m champion.

After such success was achieved off the back of a far-from-ideal preparation, thoughts turn to 2019 and what he can potentially achieve.

“It showed me how strong I could be if I was really well prepared,” he adds. “I know it (the World Cross) can be a great race for me.”

Steve Landells for the IAAF