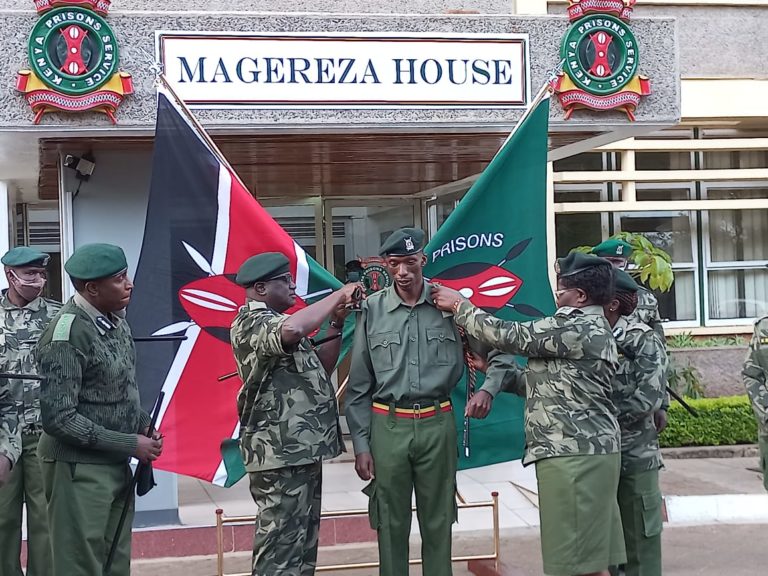 World 1500m champion Timothy Cheruiyot was on Monday promoted to the rank of Senior Superintendent of Prisons (SSP) by the Commissioner-General of Kenya Prisons Wycliffe Ogalo after his sterling performance in Tokyo.

Cheruiyot, who until Sunday was a Chief Inspector at the correctional facility, won silver at the recently concluded Tokyo Olympics clocking 3:29.01 behind Norwegian Jakob Ingebrigtsen who finished first in 3:28.32.

It is his discipline on the track and in the service that must have sparked President Uhuru Kenyatta to direct Commissioner General Ogalo to elevate the 25-year-old athlete.

“Kenya Prisons officer and Olympic Silver Medallist Timothy Cheruiyot promoted from the rank of Chief Inspector to that of Senior Superintendent of Prisons (SSP).

“I have been directed by His Excellency Hon. Uhuru Kenyatta that owing to your sterling performance in the just concluded Tokyo Olympic Games which you won a Silver medal in the 1,500 m race that in appreciation of the same, that gave honour and glory to our Nation you be instantly promoted to the rank of Senior Superintendent of Prisons. Hongera!” Ogallo wrote.

Cheruiyot, who was enlisted into the service in 2015 thanks to his athletic prowess, was a late inclusion in Kenya’s team for the Olympics after the shock defeat at the trials where he placed fourth, his first loss in the distance in 10 races over two years.

In September 2019, a week before the kick off of the World Athletics Championships held in Doha, Qatar, Cheruiyot was promoted from Prisons Constable (PC) to Chief Inspector, and went ahead to bag gold leading from start to finish in 3:29.26 for the biggest victory of his career.

Cheruiyot’s new responsibilities comes after President Kenyatta hosted representatives of the triumphant Kenyan team to the 2020 Tokyo Olympics at the State House on Monday where he announced hefty cash rewards.

The Head of State further announced a uniform token of Sh.200,000 for all athletes and officials, including the Paralympics team, currently participating in the delayed Summer Games.