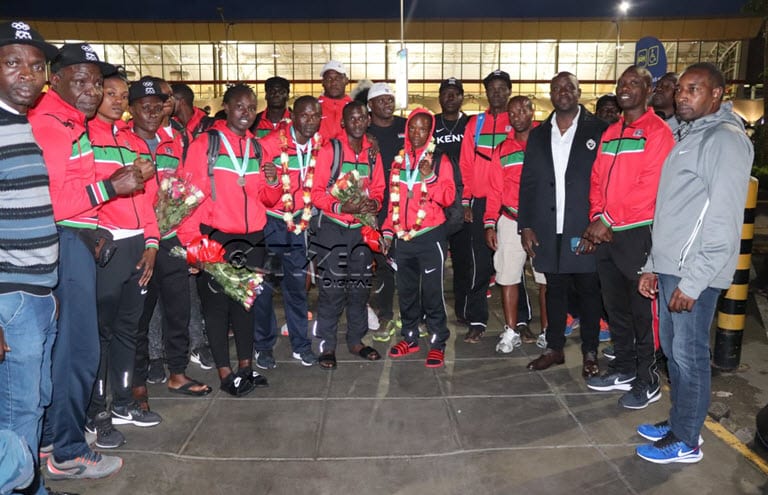 Okoth who earned the Tokyo Olympics ticket in the featherweight category in the qualifiers staged in Senegal has revealed that he fought with pain hence the need for a rest.

“My hands are very painful but after resting I will be under another strict training program under my coaches led by Musa. I believe it won’t be hard training but smart,” said Okoth who features for Kenya Defence Forces in the National Boxing League.

Okoth beat Uganda’s Isaac Masembe on unanimous points’ decision of 28-29, 29-28, 29-28, 29-28 and 29-28 in the featherweight (54-57kg) semi-final bout at the African Olympic qualifiers in Dakar, Senegal to earn his ticket to the Tokyo games with the finalists at the qualifiers assured of a ticket. He lost to Zambian Everisto Mulenga in the final.

Okoth popularly known as “Commander” turns 37 next month, and will be returning to the Olympics after 12-year hiatus with his last appearance being in the 2008 Beijing Games.

At the same time, the agile female boxer Christine Ongare, 26, who also earned the ticket to represent Kenya at the Games after beating Uganda’s Catherine Nanziri says her training should not emphasize on nutrition.

“It’s important that when you train hard, you have something to burn, not to be over fit until you become unfit. I have a special program. Feeding is not a problem but naturally I don’t like to eat a lot,” an excited Ongare told Citizen Digital.

Ongare kicked off her boxing career in 2011 in Kariobangi, Nairobi and became the first Kenyan woman to win a Commonwealth Games medal in boxing when she claimed bronze in flyweight category in Gold Coast in 2018.

She became a mother at 12 and has had a tough upbringing after being raised by a single mother and has always felt indebted to her mother who brought up her child like her own. Ongare has revealed that her kid calls her grandmother, mum upto date.

While trying to figure out her career as a teenager, Ongare tried her hand in football and martial arts, but settled on boxing because she felt it was going to change her life as a ghetto girl and be a role model to many.

Meanwhile, in Senegal, four Kenyan boxers qualified for the semi-finals in different weight categories, but it is only Okoth who made it to the medal bracket.

Ajowi was beaten by Moroccan Baalla Youness while Akinyi was outclassed by Bel Ahbiib Oumayma of Morocco in the flyweight semi-finals.

It’s yet to be known if Kenya will send boxers to the last World Olympic qualifying tournament due May 13–20 in Paris.

Already, Olympian Rayton Okwiri, who lost in the second round of his middleweight category in Dakar, has expressed his interest to go and try his luck via that route.