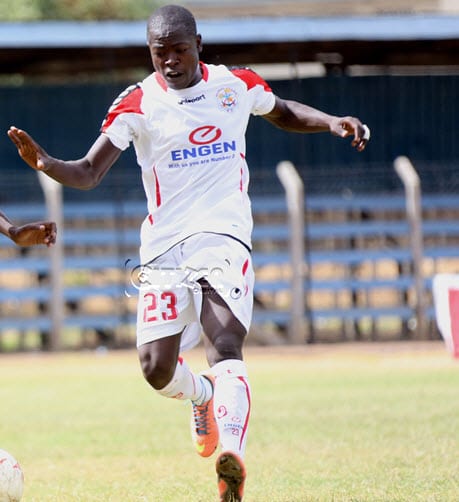 We all remember Ezekiel Otuoma, don’t we? Well, for any Kenyan footballer lover he needs no introduction.

At his prime he tormented defenders, bullying them at will, and scoring some majestic goals.

So lethal was he on a good day more so when turning out for Muhoroni Youth that defenders dreaded the thought of facing him.

However, the once ruthless goal poacher is now seeking help from the public.

His health is failing him. He’s been in and out of hospital and the doctor’s bills haven’t been kind either.

He was diagnosed with Motor Neurone Disease (MND) sometime last year; something that made him put a break on his football career, his last work station being Talanta FC.

According to his wife Rachel Otuoma, who spoke exclusively to Citizen Digital, the problem started way back in November last year. At first they thought it was just a normal flue but after several tests and scans it was revealed he was suffering from the Motor Neaurone Disease which occurs when specialist nerve cells in the brain and spinal cord known as motor neurones stop functioning properly.

“At first we thought it was just a normal flue and he was put on antibiotics but later it persisted and that’s when we decided to take him to Kenyatta National Hospital where he began to lose his speech and couldn’t talk well.”

“At Kenyatta Hospital they did some tests but nothing came out at first. Second tests revealed that his upper throat was paralyzed but the medics didn’t really understand how that occurred. That’s the time they referred us to a neurologist in the same hospital on December 6, 2020,” Otuoma’s spouse Rachel explains. “We saw Dr. Ndede who referred us again to the Aga Khan hospital where he underwent a series of tests including Magnetic Resonance Imaging (MRI) and that’s where he was diagnosed with MND.”

According to Rachel, things have now worsened with his hands and legs affected so much so that he can’t twist them normally thus in need of further treatment.

Overwhelmed by the emotional turmoil and the burgeoning medical bills, she’s calling on well-wishers to come to the aid of the striker, to help him regain his once robust health.

“For now I have spent over Sh100, 000 on his treatment. His medicine costs approximately Sh 50, 040 per month (Riluzole 5omg) – a tab costing Sh834 and he needs to take double dosage daily. That’s very expensive for sure and as a family we can’t raise that amount and that’s why I am kindly requesting for family friends and well wishers to assist me in meeting the needs,” she appealed.

“My husband has no job; his club Talanta gave him a break thinking that he could be back soon but in vain, I am now acting like a husband in the house, I have bills to pay including house rent and for sure I can’t do it alone, I need assistance,” said Rachel.

Though the family is yet to come up with a pay bill number for the contribution, Mrs Otuoma hopes to do so by Wednesday.

In the meantime former international Boniface Ambani has taken up the issues, mobilising footballers and the general public to come to the rescue of the player, with funds being channeled to his mobile phone number (0725524216) pending the availability of pay bill number.

Mark Mudenyo, a specialist medic at the Nairobi Hospital says the Motor Neurone Disease (MND) has stages, and if well managed, the patient can heal.

“It’s a dangerous disease because it has no cure although there are treatments to help reduce the impact it has on a person’s daily life. Some people live with the condition for many years, so for Otuoma’s case if it will be managed early enough then he would be in a better position of saving his life.”

“The onset of symptoms varies but the disease is common among people aged between 20 and 40 years. Generally, the disease progresses very slowly. Early symptoms may include tremor of outstretched hands, muscle cramps during physical activity, and muscle twitches,” explained Mudenyo.

Otuoma has a vast experience in the FKF Premier league after having played for AFC Leopards, Western Stima, Muhoroni Youth, Sony Sugar, Ushuru, and Talanta FC, which happens to be his last work station.