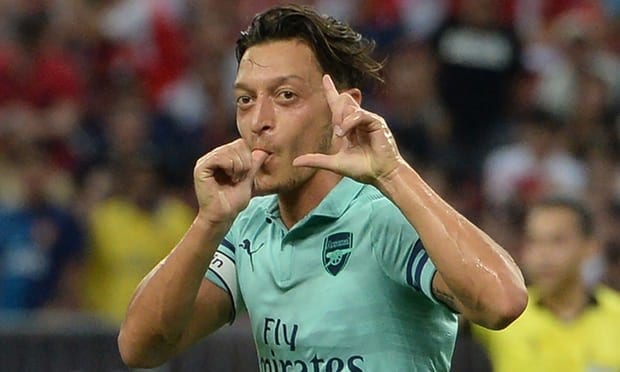 Mesut Ozil enjoyed a successful return to action at the end of a tumultuous week as the German midfielder scored the opening goal for Arsenal in a 5-1 victory over a makeshift Paris St Germain side in a pre-season friendly in Singapore on Saturday.

Ozil sensationally quit the national side on Sunday citing “racism and disrespect” for his Turkish roots as he bore the brunt of criticism following Germany’s disastrous World Cup, but he looked relaxed and focused against the French champions.

Arsenal fielded a strong team with Ozil installed as captain and the Premier League side soon took control against weakened opposition, given the time and space they will not be afforded when the domestic campaign kicks off in August.

The German did not need long to stamp his authority on the contest, side-footing past a stranded Gianluigi Buffon in the 13th minute after Pierre-Emerick Aubameyang had raced clear down the right and sent a pinpoint low cross into Ozil’s path.

The Gunners were utterly dominant and should have added to their tally, but Buffon showed the brilliance that earned him 176 caps for Italy, saving well to deny Alex Iwobi, Aubameyang and Henrikh Mkhitaryan when they were all clean through on goal.

Christopher Nkunku produced Paris St Germain’s best moment of the half shortly before the break when the French midfielder jinked past three Arsenal defenders before sending a rising shot just over the Arsenal crossbar.

Paris St Germain made a much stronger start to the second half and Nkunku soon tested replacement goalkeeper Emiliano Martinez with a stinging free kick from the edge of the penalty area that the Argentine parried clear with a diving punch.

Nkunku was not to be denied from the penalty spot, however, sending Martinez the wrong way with a spot-kick awarded on the advice of the assistant referee after Weah had tumbled spectacularly following a clumsy Sead Kolasinac challenge.

The 60th-minute strike was reward for Paris St Germain’s endeavour but they were only level for seven minutes as substitute Alexandre Lacazette scooped a sublime finish over Buffon from close range to re-establish Arsenal’s advantage.

The Frenchman needed just three more minutes to double his personal tally when Buffon missed a punch as Paris St Germain scrambled to clear, leaving an unmarked Lacazette to make it 3-1 with a free header that bounced in off the post.

Defender Rob Holding and striker Eddie Nketiah rounded out the scoring in the dying minutes as a rampant Arsenal more than made up for a disappointing penalty shootout defeat to Atletico Madrid in the tournament opener on Thursday.

Paris St Germain, who will welcome back a raft of World Cup players next week, take on the Spanish Europa League winners in the final match of the event on Monday.