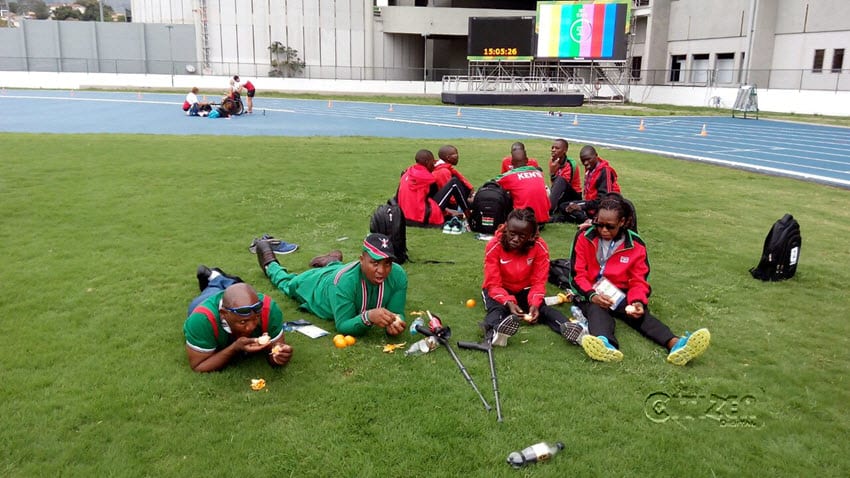 Team Kenya for the Rio 2016 Paralympics has fired a broadside to the Ministry for Sports, Culture and Arts for what they termed as discrimination against sportspersons with disability.

Led by the Chairman of National Council of Persons with Disabilities, Dr. David Ole Sankok who is with the team in Brazil, the Paralympians said the Ministry had offered little support to the team as compared to their Rio 2016 Olympics colleagues.

“We brought a total number of nine participants in Rio which is a very small number, now we have four medals, that is 50 percent so I can say the team has done well. We have a very big challenge but we will square it out.

“There was a time when there was a qualifier tournament in Doha, Qatar and we may have brought a lot of participants only if we were allowed to take part. The Ministry instead supported the Olympics and we were told there is no budget. That’s why we brought nine athletes and we may have many medals by now.”

“If you can figure out, the Kenya Olympics team did not manage to reach 50 percent depending with the medals they won. We have attained the mark and still we have the hopes of adding another two medals and we will have six out of nine medals and that will be a very good performance to us,” Songok charged.

“All these are some of challenges which when I will bring up when we return to the country. I will sit with the Ministry as well as the Head of State to tackle them since we do not want marginalization of people with disabilities to be extended to the sports arena.

“I can assure the Ministry of Sports under Dr. Hassan Wario that I am coming, and when I come he will have to explain some of the issues that’s affect the Paralympics teams and why there is no express budget to the Paralympics team,” the chairman decried.

“I suggest Ksh100m should be set aside yearly for Paralympics team so that they can purchase things like wheel chairs for racing, and venture in many sports not track events only.

“A good example is our athlete Timoi who fought hard who has tried and finished in fourth position. He practiced only two weeks we sent him to South Africa and after that he went to Kajiado and that is the desert place and he did not train well. I did not expect him to finish in that position meaning our athletes are talented and we must help them,” Songok stressed.

He said haphazard travel plans and whittling down the team almost cost them glory on the opening day when Samwel Muchai won gold in the men 5000m T11 category.

Songok said the victory at the expense of a home runner saw Brazil protest to the International Paralympics Committee and after a five-hour standoff, the decision was upheld.

“They complained that our athlete arrived in the field late. They also said our athlete having a guide due to his blindness, should have had two of them in case one got tired. But the technical manager John Tita and I managed to sort that out and being handed back our medal after five hours in darkness,” he narrated.

“If our athletes arrived early the silver would not have gone to the hosts because we had three competitors. The gold medal in Rio may have gone like that of (Ezekiel) Kemboi but Tita and I fought the appeal and won. People from Ministry of Sports were here and other joy riders but they did not assist us,” he claimed.