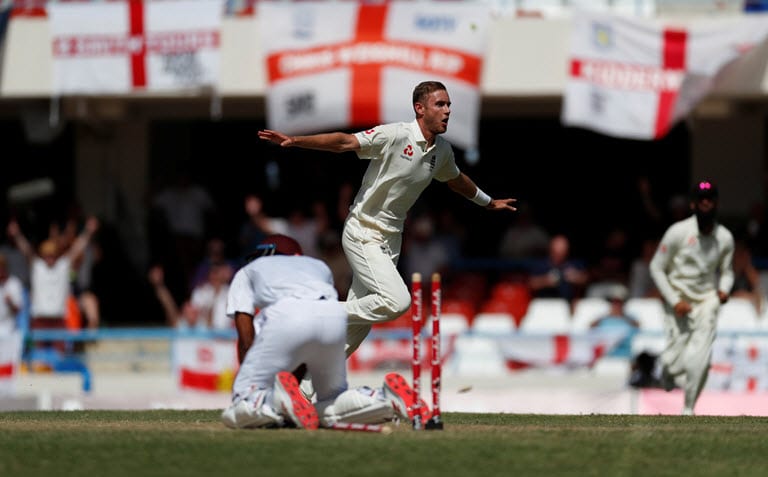 West Indies pressed home their advantage on day two of the second test on Friday, leaving England’s hopes of winning the series hanging precariously in Antigua.

Stuart Broad bowled particularly well for England, unlucky to pick up only three scalps during a long day in the field for the visitors, who dropped several catches, including two by Jos Buttler at third slip.

Broad said England were still in with a winning chance given that West Indies will have to bat last.

West Indies were 272 for six at the close in their first innings, having added 242 runs to their overnight score on a North Sound pitch that looked to have dried out considerably from Thursday’s greentop.

Left-hander Darren Bravo (33) and captain Jason Holder (19) will resume on Saturday with the home team leading by 85 runs.

Bravo faced 165 balls in an obdurate stay at the crease based on patience and a textbook straight bat.

The England bowlers, he said, had beaten the bat more than 100 times according to the team’s calculations.

“We missed a couple of chances, can only blame ourselves for that. I think we deserved more than six wickets.

“A good morning for us tomorrow and then someone plays an outstanding knock, we can win this test match.”

Broad, recalled after being controversially omitted for the first test, was the pick of the England bowlers with 3-42, while fellow pacemen Ben Stokes (1-58) and James Anderson (0-58) also bowled well without luck.

The home team put on 96 runs in the first session, with opener John Campbell the lone man dismissed before lunch, caught in the slips for 47 off Stokes.

Campbell and Brathwaite had put on 70 runs for the opening wicket, their third decent partnership in the series, providing West Indies with a launch-pad so often missing in recent years.