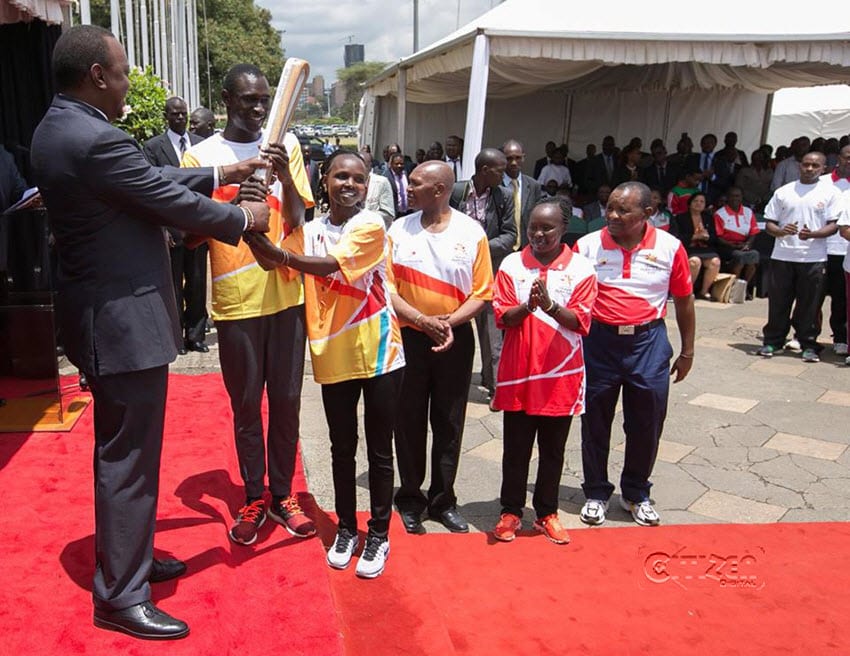 President Uhuru Kenyatta on Thursday announced that three state of art stadiums would soon be constructed in Nairobi, Mombasa and Eldoret as he paid tribute to Kenyan sportsmen and women saying their talent, skill and diligence has brought glory to the country.

“I want us all to be perfectly clear on that matter: three major stadia will soon be constructed in Nairobi, Mombasa and Eldoret, in line with the manifesto promise that we made,” the President said.

He was speaking in Nairobi when he officially received the Queen’s Baton for 2018 Commonwealth Games that will be held in Australia, President Kenyatta said the sporting fraternity has made the country stand tall at major competitions.

“In rugby, as in tennis, as in football, as in so many other sports, Kenya stands tall.  Down the years, your talent, your skill, and your diligence have brought glory to this country.  Today, as in years past, we celebrate you,” President Kenyatta said.

He added: “Let me also say what a pleasure it is to receive this relay baton on behalf of Kenya, before it continues its long journey to Australia.  That it is passing through Kenya shows the world’s confidence in Kenya’s sportsmanship, in our talent, and in our promise.”

As a new cycle of competition begins with the Commonwealth Games ahead, President Kenyatta asked Kenyan athletes to train hard and to maintain the high levels of discipline that their predecessors attained and assured them that his Administration will back them.

“So long as you work diligently, you can be sure that any obstacles, any hindrances, we can remove, we will remove.  That is the promise I give you today,” President Kenyatta emphasised.

The President said Kenya shares in the aim of the Queen’s Baton Relay, which celebrates sporting values such as fairness and perseverance as well as brotherhood across national, ethnic and racial lines

Noting that Kenya has been chosen to host this year’s IAAF World Under 18 Championships, the President said the Government is improving facilities in readiness for the event including the construction of a number of modern stadia right across the Country.

Apart from the World Under 18 that Kenya has been chosen to host, President Kenyatta reiterated preparations for the 2018 CAF Africa Home Nations Championship was still on course.

“My Administration has already constituted a local organizing committee to lead the preparations.  Arrangements are well under way – indeed, the inspection team from the Confederation of Africa Football, which visited us recently, reported that we had made good progress,” he declared.

The Baton landed in Nairobi from Nigeria on Wednesday and is on tour in Kenya until Saturday.

Modelled around the Olympic Torch Relay, the Baton that was launched on March 15 at the Buckingham Palace bears the message from Britain’s Queens Elizabeth and began its international tour in Africa in Sierra Leone.

According to communication from Nock, the baton will be received by the Australian High Commissioner in Nairobi on Thursday evening before it travels to the athletics-rich talent reservoir of Eldoret and Iten on Friday.

It will then return to Nairobi on Saturday morning to be taken to Karura Forest before being transported back later in the day to the Jomo Kenyatta International Airport for its departure.

The 21st Commonwealth Games will run in Gold Coast, Australia from March 25 to 18 April.