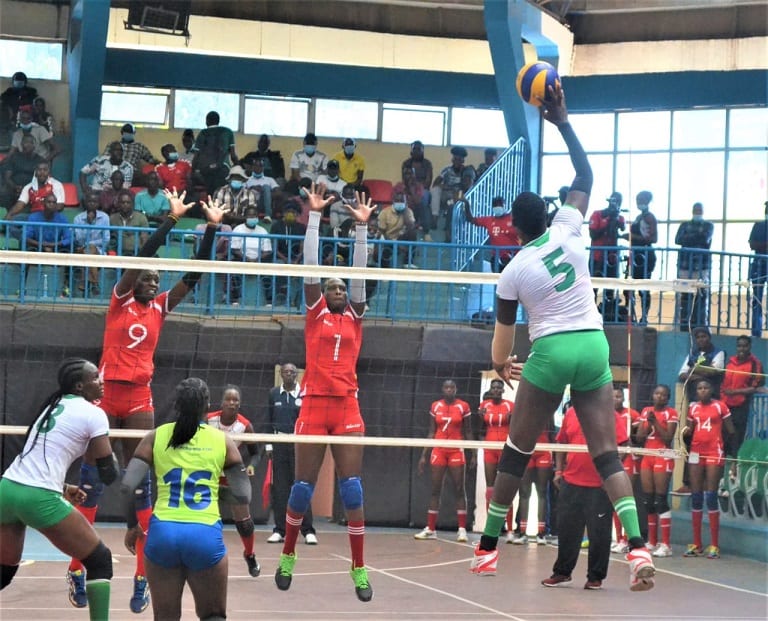 Kenya Prisons women’s volleyball team continued with their hundred-percent win start to the Kenya Volleyball Federation National League after registering straight wins Saturday and Sunday during the second leg of the regular league at the Nyayo National Gymnasium.

Despite the perfect start, Prisons head coach Josp Barasa warned his charges against laxity while at the same time maintaining that his eyes are on the title for the third time on the bounce.

“This season will be tough with many teams out to win the title but we’re ready for the challenge. Our focus is to retain the league and also replicate the same in the African Club Championship this year.”

At the same venue, KCB came from behind to upset former champions and African Club bronze medalists Kenya Pipeline in a four sets thriller.

The Oilers who have six points after three matches, secured the first set with 25-23 points after a master class performance from former under-20 national team left-attacker Pamela Adhiambo who was spot-on in her spiking and blocking, before her touch withered in the subsequent sets.

Japheth Munala-coached KCB regrouped in the second set to win 25-21 and held on with a five-point gap against their opponents the next sets to win 25-19 and 25-17.

Pipeline head coach Paul Gitau decried inexperience after his charges threw away their lead but said he picked ‘some’ lessons from the defeat.

“We’ve a young squad which needs some discipline and then it clicks. KCB is a strong team with some experienced players and if my players continue doing what is required, no doubt we will be where I want the team to be, ” said Gitau who took over the Embakasi based outfit last year.

His opposite number Munala was quick to note that his team, which won 3-0 against KDF in their first match of the second leg Saturday, has finally found their rythm following a stuttering start in the first leg.

“I believe now the squad has hit top form after intensive training and I’m happy we’ve bagged all the possible six points in our second leg matches,” he said.

In the men’s fixtures which were played at Kidundu Stadium in Vihiga and Nanyuki, David Lung’aho-coached Kenya Prisons bagged 11 points in their four matches at Vihiga.

Prisons who finished third in 2019, easily saw off hosts Vihiga County team and Administration Police in straight sets before completing their four against much-fancied KPA 3-2 and Nairobi Prisons 3-1.