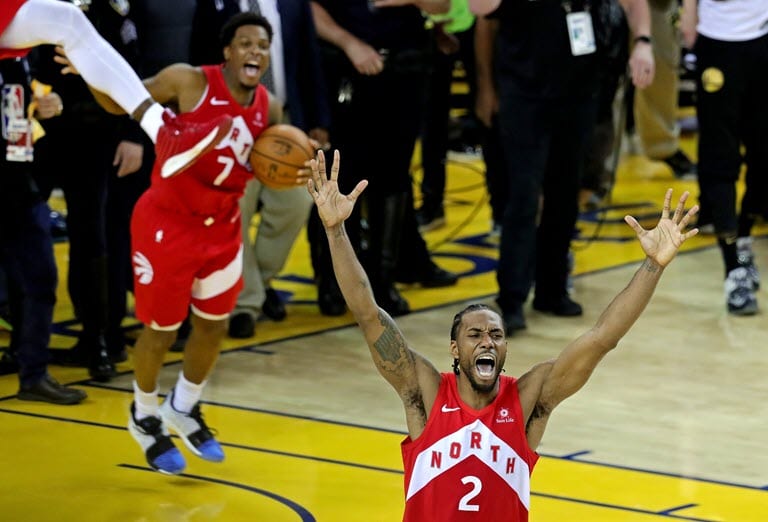 The Toronto Raptors took down the dynastic Golden State Warriors to win Canada’s first NBA title but now face perhaps their toughest battle yet as they try to convince Kawhi Leonard to have a long-term future with the team.

Leonard, whom the Raptors acquired last July as part of a blockbuster trade with San Antonio, carried Toronto to heights few thought possible and will draw plenty of interest from other teams when he becomes a free agent on June 30.

His future with the Raptors has been a never-ending subplot since he joined Canada’s only NBA team and he was asked about it moments after being presented with the NBA Finals Most Valuable Player award on Thursday in Oakland, California.

“I’m about to enjoy this with my team-mates and coaches and I’ll think about that later,” said Leonard.

As Leonard kept adding to one of the most memorable playoff performances in NBA history, giant-sized murals depicting him appeared on buildings in Canada’s largest city.

In an effort to convince Leonard to sign a contract with Toronto, many restaurants in the city joined a ‘Ka-Wine & Dine’ initiative that offers him free food while a real estate broker promised him a free multi-million-dollar penthouse.

When Leonard arrived in Toronto, he was coming off a season in which he missed all but nine games with a quadriceps issue and it was no great secret that his preferred destination was his birthplace of Los Angeles.

At the time, many experts thought the Raptors forward would play out the season and then sign a contract with a team in Los Angeles.

“We all know where my destinations were but obviously, like I said, when I was there on my opening-day meeting that I was focused on the now, and I wanted to make history here and that’s all I did,” said Leonard. “I’m still playing basketball no matter what jersey I have on.”Even during the NBA Finals, Leonard was asked to clarify a report that he had purchased property in Toronto, and some Raptors fans interpreted the 27-year-old’s answer as a sign that he planned to stay in Toronto beyond this season.

Without Leonard, the Raptors would surely not have been in a position to dethrone a Golden State team who were seeking a third consecutive championship and their fourth in five years.

During the second round of the playoffs, Leonard delivered the most memorable shot in the Raptors’ 24-year history with an off-balance, three-point buzzer-beater in a decisive seventh game that bounced off the rim four times before dropping in.

Leonard, who is the focal point of the Raptors offense, was named the NBA Finals Most Valuable Player for the second time in his career after averaging 28.5 points in six games against a banged-up Warriors team.

His performance may have even brought an end to one of the NBA’s great dynasties given that the Warriors, who were ravaged by injuries in the Finals, have some key players who will also become free agents in a couple of weeks.

Toronto will have a parade on Monday to celebrate the first major professional sports championship for a Canadian team since Major League’s Baseball’s Blue Jays won the World Series in 1993.

While fans toast the Raptors, behind the scenes the focus will be on how to convince Leonard to make a home in Toronto and not break up a championship team that never wavered in its championship season.

“I think together we have this unit, a bunch of guys that will go out there and, they weren’t top picks or whatever the case might be, but guys that just go out there and work every single day and try to be the best that they can be and unselfish.”