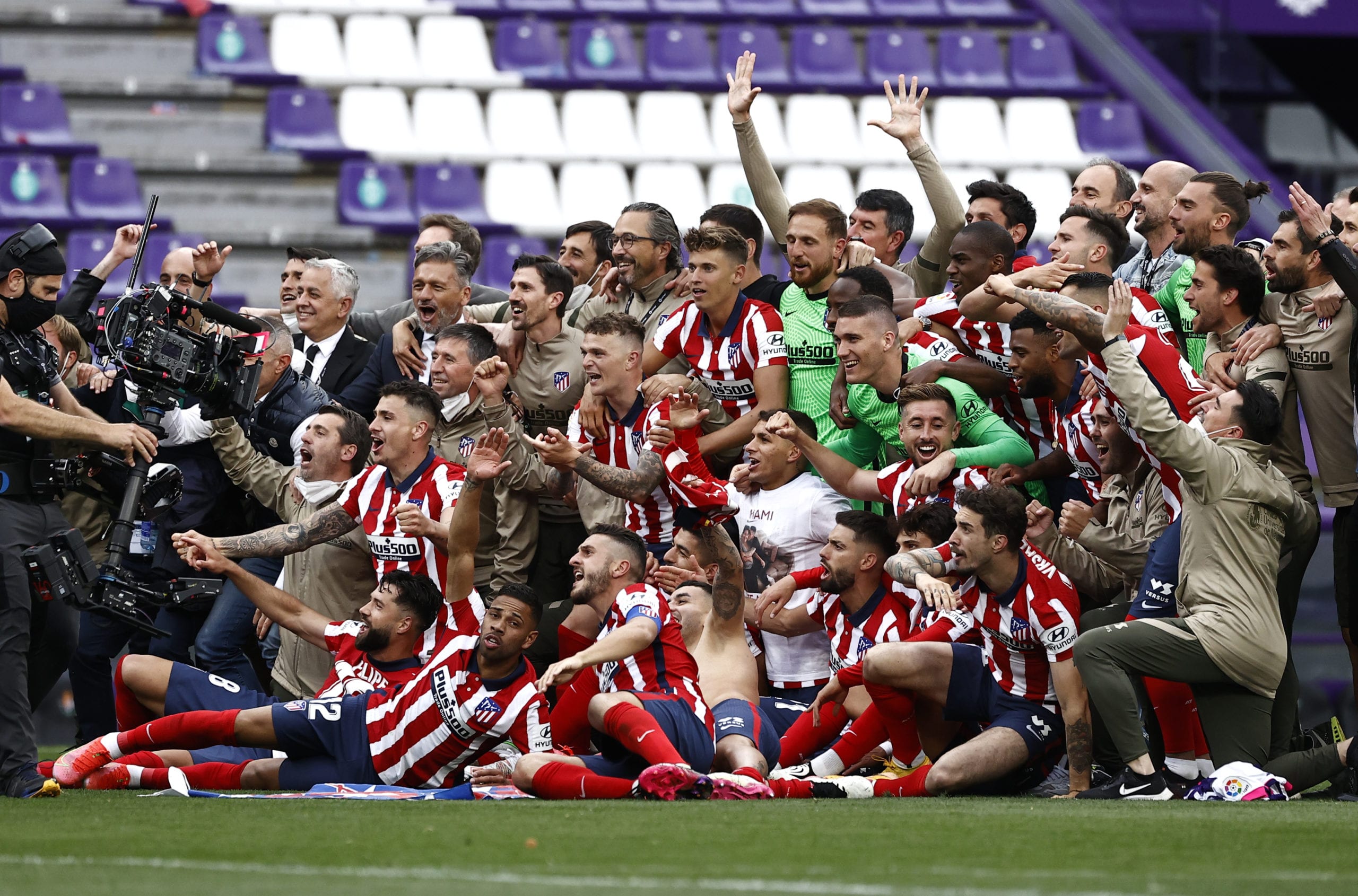 Atletico Madrid edged city rivals Real Madrid to the La Liga title in dramatic fashion after coming from behind to beat Real Valladolid 2-1 in the final game.

Diego Simeone’s side trailed to Oscar Plano’s strike but turned the match around in the second half through goals from Angel Correa and Luis Suarez.

Real scored twice late on to beat Villarreal 2-1  in their final game but came up short as they needed Atletico to drop points.

Atletico clinched their first title in seven years and their 11th overall.

It was a highly satisfactory triumph for Los Colchoneros as they finished just two points ahead of defending champions Real, who end the season without silverware.

Barcelona – playing without skipper Lionel Messi, who was resting before the summer’s Copa America – won 1-0 at Eibar through Antoine Griezmann’s acrobatic strike and clinched third place ahead of Sevilla.

Julen Lopetegui’s side play their final league game on Sunday against Alaves but will finish fourth even with a victory because of an inferior head to head record against Barca.

The La Liga title race was set up for a thrilling conclusion and it delivered drama.

Injured skipper Sergio Ramos celebrated in the stands as news filtered through of Atletico falling behind, but the Spain defender was subdued in his seat just two minutes later when Yeremi Pino flicked in a goal for Europa League finalists Villarreal against Real.

With both Madrid sides behind at the break, Simeone and Zidane needed to give big team talks.

In the second half, Karim Benzema thought he had equalised when he powered in a header and while VAR checked the goal – and ruled it out – Atletico levelled through Angel Correa’s smart finish to put them on the verge of glory.

Benzema, who has earned a recall to the France squad for the summer’s European Championship, dragged wide from a promising position and seconds later Suarez ran clear and converted a cool finish to put Atletico 2-1 up.

Uruguay striker Suarez started the season by being told by Barca boss Ronald Koeman he was not in his plans for this season but went on to to score 21 league goals – including the most important one of all.

A tearful Suarez said afterwards: “I am delighted the way Atletico have appreciated me and given me the chance to keep showing I can perform on this stage. I thank them for trusting in me, a lot of people have suffered with me, my wife, my children.

“I have been playing football for many years and this is the year my family and I have suffered the most. It is an amazing feeling to have performed on the final day of the season.

“My work is to help the team and pay them back by scoring goals. Sometimes it is necessary to push even harder but Atletico is a huge club and we have shown it this season – we have been the most regular performer and that is why we are the champions now.”

Although Benzema curled in an equaliser on 87 minutes and Modric netted the winner in injury-time for Real, it was not enough as Atletico players celebrated on the pitch with some travelling fans gathered outside the stadium in Valladolid.