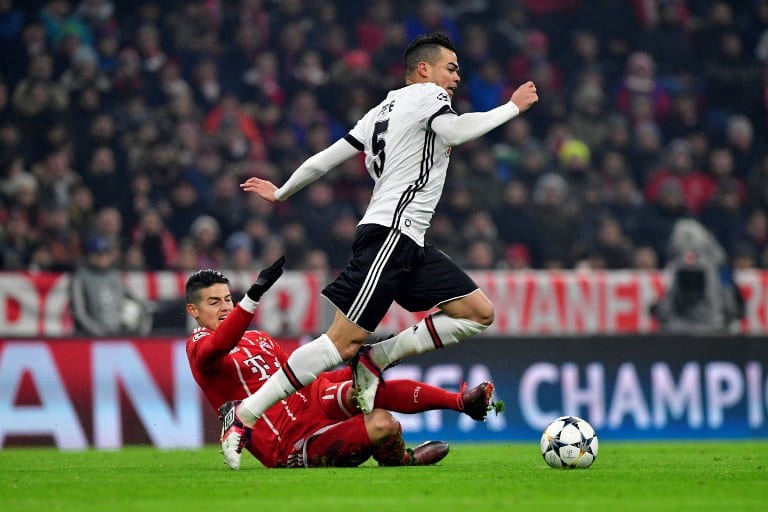 Runaway Bundesliga leaders Bayern Munich are waiting to discover the extent of James Rodriguez’s calf injury amid grumblings of unrest in their star-studded squad.

The Colombian international limped off after 44 minutes of Tuesday night’s 5-0 mauling of Besiktas in the Champions League last 16, first-leg tie.

Bayern hope for good news when the attacking midfielder is examined on Wednesday.

“I think the injury is not that bad, but I don’t know if it will take a few days or longer – we will have to see,” said head coach Jupp Heynckes.

Heynckes said Rodriguez did not feel a sharp “sting, like a muscle tear, but it came on gradually, so it was better to take him off.”

Bayern are waiting to see if the 26-year-old will miss Saturday’s Bundesliga game at home to Hertha Berlin.

The Bavarian giants are on a 14-match winning run, 19 points clear in the Bundesliga table and on course for a sixth straight league title.

When Rodriguez went off just before half-time, Arjen Robben replaced him and helped set up goals for Thomas Mueller and Robert Lewandowski, who both scored twice.

In post-match interviews, Robben was clearly annoyed at starting on the bench alongside fellow veteran winger Franck Ribery, who came on for the final 10 minutes.

“When you don’t play, it hurts, but I don’t want to say more or I’ll end up in trouble,” fumed Robben.

The German media were quick to pick up on his malaise amid concerns it could spark unrest within the team.

“Of course players like Arjen and Franck are disappointed when they are left out,” said defender Jerome Boateng reassuringly.

“There wasn’t any trouble and Arjen gave us new momentum when he came on.

“James has played well in the past few weeks, it was a difficult decision to make – it’s not easy for the coach.”

Heynckes had all of his outfield players fit to face Besiktas and admits it is a struggle deciding who to leave out.

“I have to manage that and I do what I think is right. Everyone has to accept that. Full stop,” said Heynckes.

“He (Robben) came in and invigorated us, I knew he would and I am glad to have options up front.”