Road to Doha: With Dibaba out, Kipyegon, Hassan highlight 1,500m

With major question marks against all the chief contenders, predicting the outcome of the women’s 1500m with any great level of confidence is a tricky business.

The world number one Sifan Hassan has demonstrated her middle-distance supremacy in 2019 by recording the world’s fastest time (3:55.30) in Monaco en route to the world mile record as well as claiming an emphatic 1500m victory at the IAAF Diamond League final in Zurich.

She will only make a call on which of the shorter events to contest after her 10,000m final, but the current indications are that she will opt for the 5000m over the 1500m.

If Hassan does not line up for the 1500m, the event becomes more open, even more so after Genzebe Dibaba, the 2015 world champion, was a late withdrawal due to plantar fasciitis.

Faith Kipyegon could step up to retain her title after taking a year out of the sport in 2018 to give birth to daughter Alyn.

The Kenyan, who is also the Olympic champion, made a triumphant return to the track with victory at the IAAF Diamond League meeting in Stanford in June but picked up an adductor injury.

Her only other competitive race this year came at the Kenyan Trials earlier this month, where the ever-smiling Kenyan claimed an important victory. 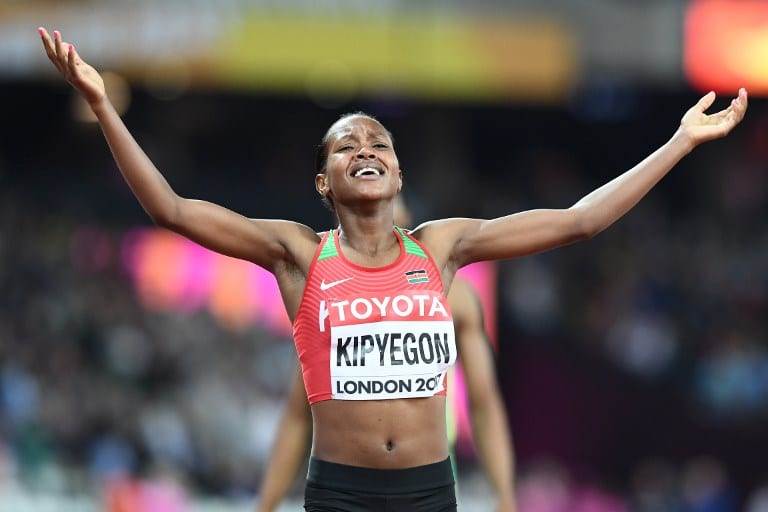 Great Britain’s European champion Laura Muir was in cracking form over the first half of the season, highlighted by a 3:56.73 performance for second place in Rome.

However, a calf injury put the brakes on the preparation and it is not yet known how that has compromised her shape and fitness.

Germany’s Konstanze Klosterhalfen has enjoyed an outstanding season, setting national outdoor records for the mile, 3000m and 5000m. Over 1500m her highlight came when the 22-year-old clocked 3:59.02 to finish second at the IAAF Diamond League final in Zurich.

Yet as much as the US-based athlete could be a significant threat in the 1500m, she is also entered for the 5000m and is yet to decide which event to prioritise.

Ethiopia’s Gudaf Tsegay set a personal best of 3:57.40 in Rabat and as a consistent performer on the IAAF Diamond League circuit it would be folly to take her out of the medal equation. Her teammate Axumawit Embaye, the 2016 world Indoor silver medallist, is another who has impressed.

The US assault is led by national champion Shelby Houlihan. Last season Houlihan was a major force internationally, running a PB of 3:57.34, but this year she has opted to only compete domestically, although she remains a genuine threat.

Her compatriot, the evergreen Jenny Simpson, has proved an adept championship specialist having snared 2011 world gold and silver medals at both the 2013 and 2017 editions and will once again look to feature.

Canada’s Gabriela Debues-Stafford has been one the standout improvers during a memorable 2019 season. Performing consistently well, her pinnacle display came when setting a national record of 3:59.59 for third at the IAAF Diamond League final in Zurich.

Other names set to feature could Rababe Arafi, who set a Moroccan record of 3:58.84 in Rabat. Other sub-four-minute performers in the field include Winnie Nanyondo of Uganda and Kenyan champion Winny Chebet.