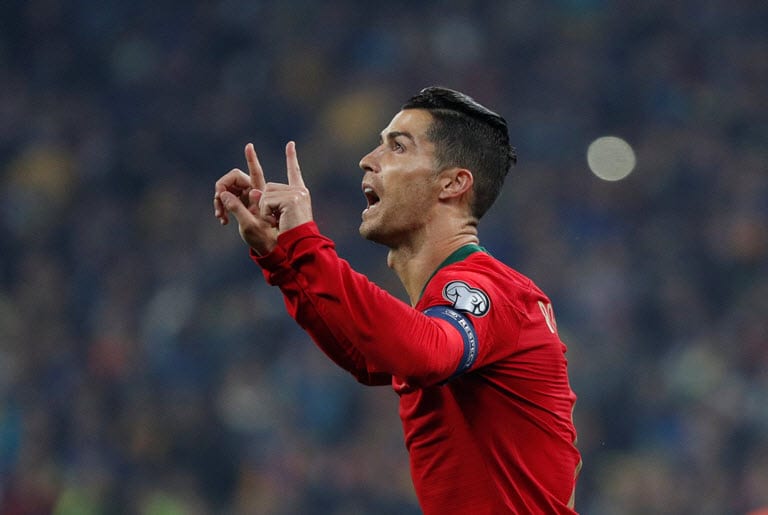 Cristiano Ronaldo reached a career landmark on Monday by scoring his 700th career goal in Portugal’s Euro 2020 qualifier at Ukraine.

The 34-year-old scored a penalty as Portugal lost 2-1.

His goal in the 2-1 loss to Ukraine was also his 95th for Portugal, leaving only Iranian Ali Daei in front in the international charts on 109 goals.

The win for Ukraine, meanwhile, means they have qualified for Euro 2020.

Ronaldo’s goal means he joins an elite group of players to have hit at least 700 goals in their career.

According to data from Rec.Sport.Soccer Statistics Foundation, Juventus forward Ronaldo is still some way behind the most prolific player of all time, with Czech-Austrian Josef Bican scoring 805 career goals.

Next on the list is Brazil legend Romario, who bagged 772, while his compatriot Pele is third on 767.

Andorra, Armenia, Latvia and Sweden are the countries to have suffered the most at the hands of Ronaldo, who has scored five goals against each of them.

He has four apiece versus Estonia, Faroe Islands, Hungary, Lithuania, Luxembourg and the Netherlands but has never scored against France, Germany, Italy or England.

Ronaldo is no stranger to breaking records. You name it, he has probably broken it.

The list is almost endless. So what is left for him to achieve?

There is still his ongoing tussle with Barcelona’s Lionel Messi to be statistically the outright best player in Europe.

Ronaldo’s goal against Bayer Leverkusen in the Champions League at the start of the month took him up to 605 club goals, two above Messi’s 603.

The pair are the joint all-time top goalscorers in Europe’s top five leagues on 419. Ronaldo has 422 league goals, but his three in Portugal for Sporting Lisbon do not count as one of the top leagues.

Ronaldo still needs four Champions League final goals to overhaul Puskas’ and Alfredo di Stefano’s record of seven, while he needs to score in the competition again next season to match Ryan Giggs’ record of netting in 16 consecutive seasons.

Still plenty for him to aim for then…