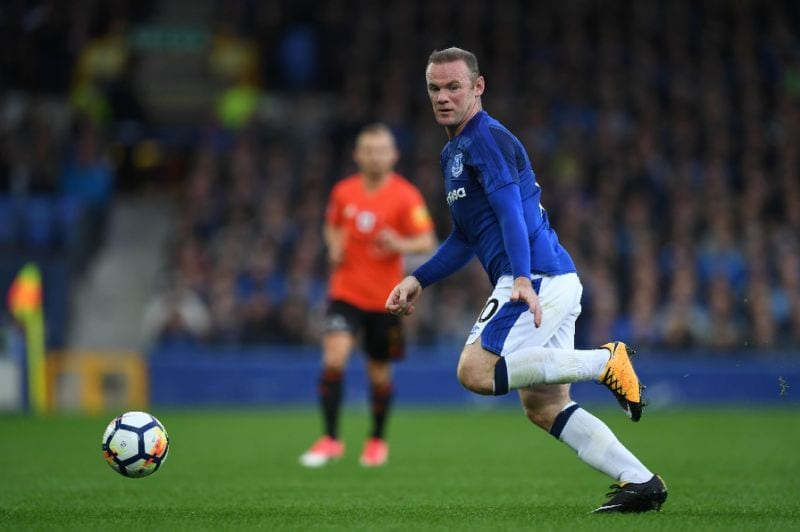 Wayne Rooney made his second competitive ‘debut’ for his boyhood club Everton on Thursday, as Leighton Baines grabbed a 1-0 Europa League third-round qualifying victory over Slovakian side MFK Ruzomberok.

The former Manchester United and England captain had revealed in the build-up to the match at Goodison Park that it had been a lifelong ambition to play for Everton in Europe.

Thirteen years after leaving Merseyside for Old Trafford, Rooney finally fulfilled that ambition although it was a frustrating evening for manager Ronald Koeman and his new-look Everton side.

“It’s something I’ve been looking forward to for the last few weeks,” said 31-year-old Rooney.

“It’s obviously great to be at Goodison wearing the blue shirt, it was a great feeling.

“But it was an important game for us so I had to put my emotions to one side. I’ve done that now and can get down to focusing more on the football.”

And while Rooney’s return was greeted with the expected enthusiasm by a sold-out, if reduced-capacity, Goodison Park crowd, last season’s third-placed Slovakian team provided dogged opposition.

It was not until the 65th minute, when a Kevin Mirallas corner was headed out to Baines 25 yards from goal, that Evertonians could finally relax in this first leg tie.

Baines struck a magnificent shot but it still required a kind deflection off Erik Daniel to wrong foot goalkeeper Matus Macik and fly into the visitors’ goal.

Early signs had been promising for Everton when Ruzomberok captain Dominik Kruzliak sliced the ball horribly as Klaassen surged into the area and almost put the ball into his own goal before the keeper cleared.

Then, on 19 minutes, Rooney spied his first sight of goal back in an Everton shirt after another flowing attack, which ended with Klaassen sweeping the ball wide for Baines to pick out the striker who spun and sent a powerful shot wide.

Just before the half-hour, Dominic Calvert-Lewin, hero of England’s under-20 World Cup win this summer, showed great skill to win a tackle on his way into the box and his short cross found Rooney who slipped as he shot goalwards.

Calvert-Lewin was involved again a minute later, this time setting up Klaassen with an intelligent pass, but the Dutchman shot into the side-netting with the goal seemingly at his mercy.

It was looking an increasing danger that those misses might prove costly and before the break Daniel was given acres of room to deliver a 22-yard shot which Maarten Stekelenburg kept out, diving sharply to his right.

Everton’s concerns continued after the restart when uncertain defending allowed Daniel a shot which, fortunately for the home side, he miskicked wide.

Yet Rooney, and Everton’s, big occasion might have been spoiled just before the hour when Dalibor Takac’s free-kick picked out Jan Maslo, whose powerful header was tipped onto the bar by Stekelenburg although replays showed the defender was clearly offside.

That was a scare that prompted Koeman into bringing on another new signing, Spanish striker Sandro Ramirez, and his pace and energy enlivened his team with the goal coming soon afterwards.

Mirallas might have claimed the second goal Koeman would have wished for, ahead of next week’s second leg, but Macik made a superb reflex stop before Ruzomberok substitute Milos Lacny wasted a glorious late chance to equalise.

Elsewhere in qualifying on Thursday, AC Milan began their new era under Chinese ownership with a scrappy 1-0 over Universitatea Craiova in Romania, as Swiss full-back Ricardo Rodriguez scored the winner on his debut.