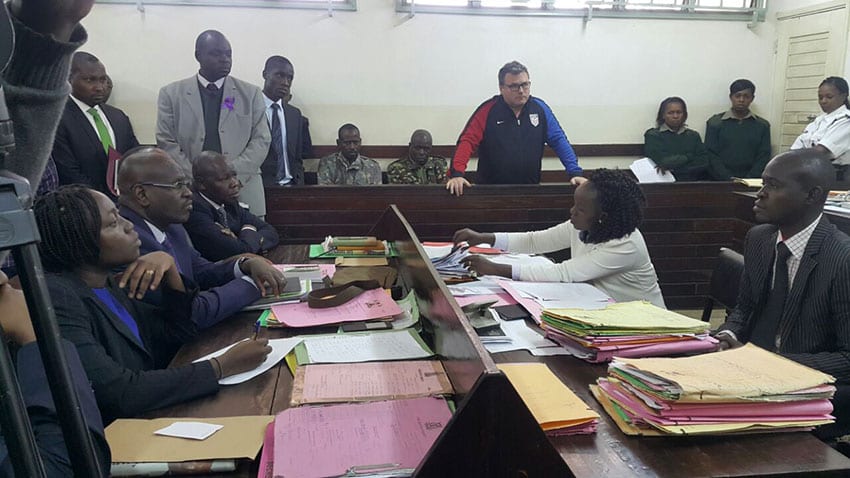 Italian manager and Rosa Associati director; Federico Rosa, was released on Friday on Ksh300,000 cash bail and ordered to surrender his passport as authorities continue investigations into doping allegations against him.

During the mention, it emerged that Elijah Kiprono Boit, who finished fourth at the 2001 IAAF World Youth Championships in Debrecen, Hungary and fifth at the 2004 World Junior Championships Grosseto, Italy over 800m is the complainant in the case facing the renowned Italian manager.

The magistrate deferred the case to give police time to provide the medical records from 2004 to 2008 of the now retired athlete who was once under the Rosa stable.

Federico was represented by lawyers Moses Kurgat, Katwa Kigen and Ruth Kirunga with one of his biggest clients, Beijing 2008 Olympics and three-time men 1500m champion, Asbel Kiprop, was among those in court to follow the proceedings.

“We have come today to receive the counts the prosecution is making against Federico and the counts are three counts of conspiracy which are generally about doping.

“My client has invested a lot in athletics. They ran three camps in Kapsabet, Kaptagat, Elgeyo Marakwet and in Kapsait at the border of Elgeyo Marakwet and Pokot. They have also been able to secure eight world records and currently managing about 140 runners and six of them are going to the Olympics.

“My client is supposed to escort his athletes to Rio and it’s very unfortunate that these allegations are being at this point where the athletes are preparing to go for the Olympics.

“There is a risk in this kind of an approach to the matter by the prosecution can lead to a situation where any success of an athlete will be viewed against the background of this wild allegations and dilute the success they make. For now we just wait for the July 14 outcome,” the renowned lawyer Kigen said outside the court.

His father; Dr. Gabrielle Rosa was also present looked distraught as he paced nervously along the courts corridors hoping that his son would be released and allowed to return home in Italy.

“I’m not happy with the case. It is not true and to make matters worse its dated way back to 2004. It is incredible that it’s being done after 12 years. It has affected me emotionally and I feel bad since have invested a lot in this country.

“I shall have to reconsider continuing working in Kenya. Most managers and even agents feel intimidated by this matter and they just want to pack up and leave. I have spent 26 years in this country and invested a lot in the growth of athletics and athletes. I’m very upset,” the distressed veteran manager and renowned marathon coach lamented.

At the same time, former double Africa junior distance champion, Matthew Kisorio, has retracted his statement accusing the Rosa camp of being behind his two year suspension from the sport from 2012 to 2014 for doping.

Across town at the Milimani Law Courts two-men were remanded for 10 days for alleged involvement in doping.

Joseph Karuri Mwangi and Ken Kipchumba were arrested on Thursday in Eldoret by Anti-Narcotics Police Unit officers as the crackdown against the vice that started last weekend when the Rosas were apprehended continued.

According to the prosecution Karuri operates an herbal clinic within Eldoret town while Kipchumba is a clinical officer based at St. Luke’s Orthopaedic and Trauma Hospital in the town.

State Prosecutor; Duncan Ondimo told Senior Principle Magistrate, Joyce Ngadani, that the two should remain in police custody in order to allow investigations against them be completed.

The court heard the probe touches on the reputation of sports especially athletics in the country and if released, they will interfere with investigations and may abscond based on seriousness of the allegations against them.

The matter will be mentioned on the July 18.