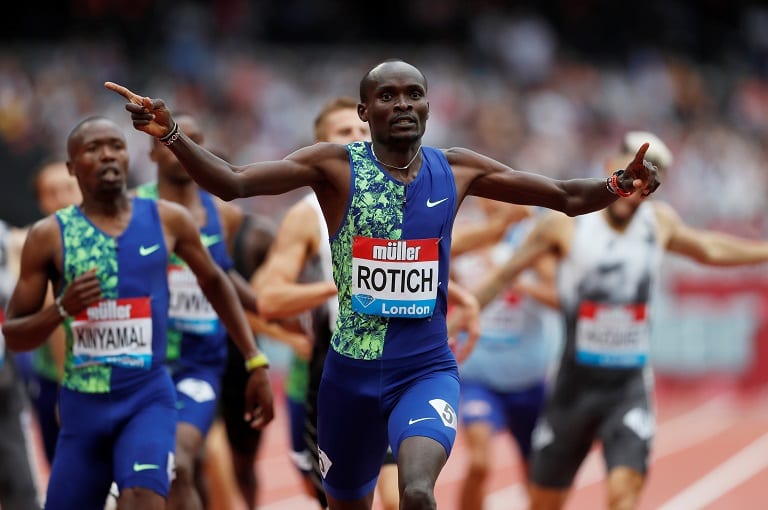 Kenya’s Ferguson Rotich took command of the Diamond League 800m standings with a decisive 1:43.14 victory at the Muller Anniversary Games in London Stadium on Saturday.

The Kenyan took the lead with just over 100 metres remaining, holding off his quick finishing compatriot Wyclife Kinyamal, who clocked 1:43.48.

It was the third fastest career performance for Rotich, a 2016 Olympic finalist, and a season’s best for Kinyamal.

Amos pulled up less than 200 metres into the race, clutching his right hamstring before falling to the track while Korir, still feeling the effects of a serious automobile accident he was involved in three weeks ago, was never in the hunt, finishing a distant eighth in 1:44.75.

South African Akani Simbine pulled off something of a surprise in the 100m, holding off local hope Zharnel Hughes and former world champion Yohan Blake to come home in 9.93 seconds.

Hughes had clocked an impressive 9.96 in the heats, despite easing up and running into a slight headwind but after an early stumble he was always trailing in the final, posting 9.95.

Blake, the joint-second fastest man of all time with his 9.69 set in 2012, is getting back towards his best and continued his good season with third in 9.97 as the top five all broke 10 seconds.

Simbini has been knocking at the door for a few years, with fifth places in the Olympics and world championships and gold at the Commonwealth Games and African championships and now looks equipped to challenge the best of the United States at this year’s worlds in Doha in September.

“I’m really happy with the time. I came here to make sure I got the win to build confidence and I came away with a season’s best,” he said.

“It’s about getting through the races and winning them so by the time I get to world champs and I’m facing the rest of the world I’ll be ready and the confidence will be there and I’ll be able to believe in the work I’ve done.”

Olympic champion Elaine Thompson was a convincing winner of the women’s 200m in 22.13, holding off fast-finishing Marie-Josee Ta Lou (22.36) and Britain’s Beth Dobbin, who was delighted with a personal best of 22.50 having had to miss the race a year ago to work.

There was more to cheer for home fans as Laura Muir delivered a dominant front-running display and a blistering last lap to win the 1500m in 3:58.25. “That’s probably close to my 400m PB,” the Scot said of the 57.54 burn up.

Jamaica’s Danielle Williams fired out the fastest time of the year in winning the 100m hurdles in 12.32 – a shade behind the world record set by American Kendra Harrision in the same meeting three years ago.

“It has been coming all season and it was just about when,” said Williams. “This is a fast track and the fact that we get two opportunities because of the heats you can fix what you did wrong ready for the final.”

In the 5,000m, Ethiopia’s Hagos Gebrihiwet had a little too much in the tank for Jakob Ingebrigtsen, the European champion, as he surged home in 13:01.86.

There was some consolation for the 18-year-old Norwegian though as his 13:02.03 took a remarkable 15 seconds off his pb to set a European uunder-20 record and put him in good shape for his 5,000m/1500m double bid in Doha.

“I’m definitely able to go under 13 minutes. I was hoping for a personal best, but a national record is even better,” Ingebrigtsen said.

It was Norway all the way in the 400m hurdles as Karsten Warholm destroyed the field to come home in a European record 47.12 seconds, miles ahead of Turkey’s Yasmani Copello (48.93).

Warholm, another with fond memories of the Olympic Stadium after winning the world title here two years ago, was in total control from the start. Running in his preferred lane seven, saying it is better for his hamstrings than the tighter inside lane, he wiped away his personal best of 47.33.

“It takes hard work, dedication and a lot for me to get out those extraordinary times,” he said.

There was huge disappointment for the crowd when Botswana’s Nijel Amos, who ran the fastest 800m by anyone since the London 2012 Olympics, in Monaco eight days ago (1:41.89), fell 120 metres into Saturday’s race. In his absence Kenyan Cheruiyot Rotich held off compatriot Wyclife Kinyamal in 1:43.14.