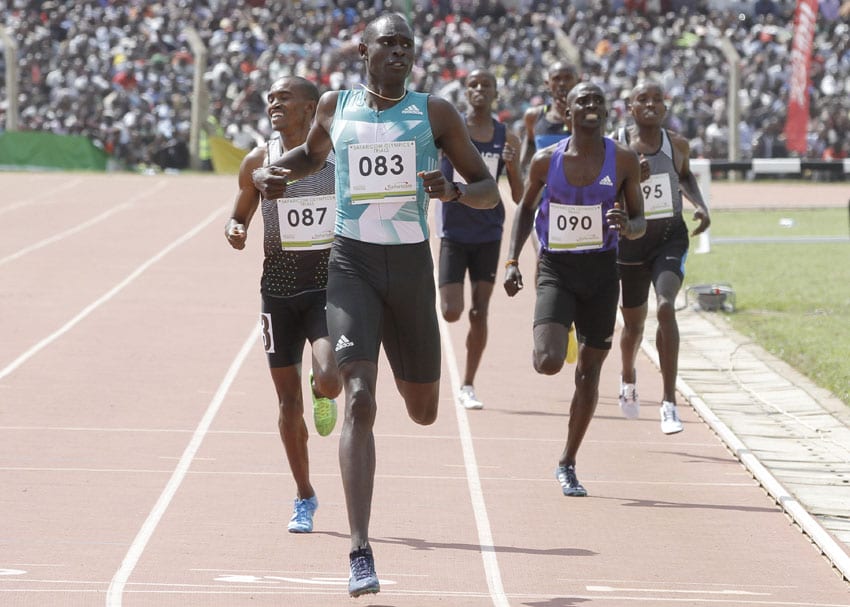 Olympic champion and men 800m world record holder, David Rudisha delivered a statement of intent when he dropped his season’s best of 1:43.4 to win his semi final of the Kenyan Trials for Rio 2016 on a baking Thursday afternoon at a packed Kipchoge Keino Stadium in Eldoret.

Fellow London 2012 gold winner and steeplechase king, Ezekiel Kemboi broke no sweat in qualifying to Friday’s finals in the men 3000m water and barriers race after he eased to third (8:35.88) in the first semi as all favourites navigated through the penultimate stage.

Rudisha led former world junior silver medallist, Jackson Kivuva (1:44.0) and Jonathan Kitilit (1:45.3) in the fastest semi of the day to underline his intentions of defending his crown in Brazil in the punishing elevation of 2100m above sea level.

In sunny weather; the Daegu 2011 and Beijing 2015 world champion who faded to fourth (1:45.69) during his last outing in Stockholm, Sweden on a rain swept night on June 16 tucked behind Kitilit who went out hard from the start.

The hopeful led the runners through 600m before Rudisha opened up his long strides to propel to victory as an appreciative crowd roared on.

“The important thing is qualify but we went out very fast in the first lap, Kitilit is a good runner, he pushed it so hard. Running 1:43 is such a very good time.

“I’m out to make the team, that’s my goal and if we go to the Olympics where I aspire great things. If I get there, I believe I shall do a good job,” Rudisha said after his performance.

Local arch rival Ferguson Rotich who has beaten him twice this season also won his race in one minute, 45.94 seconds with former world junior champion, Alfred Kipketer, taking the first semi in one minute, 45.42 seconds.

Rotich led Olympics bronze winner, Timothy Kitum (1:46.04) and Patrick Kiprotich (1:46.04) to the top three where he had the luxury of slowing down in the last 50m to salute the crowd and pump his fists in the air before crossing the line.

The 2012 World junior champion, Leonard Konsecha ran 1:45.45 to finish second behind his successor, Kipketer in the first semi of the afternoon as 2010 Commonwealth bronze winner, Nicholas Kiplagat (1:45.49) squeezed to the final as a fastest loser.

Friday’s men 3000m steeplechase final will echo the Olympics medal race itself after the country’s best booked a date for a titanic showdown.

Ever the showman, the Athens 2004 and London winner, Kemboi or ‘Baba Yao’ (The Father) as he known invited cheers as soon as he stepped to the track for the warm-up and after propping the field in the first four laps, Kemboi and his chosen protege, Conseslus moved into position in the business end of the contest.

Ahead of them, Alex Kibet  who was fourth at the National Championships was in command and after the bell, Kemboi tugged on Conseslus and told him to slow down as he prepared to move to the lead on the back-straight with the two favourites talking to each other through the race.

Kemboi then led his bridesmaid at the last two World Championships past the battery of local and international media, sparing any comments perhaps for the final.

In the second semi, Kipruto who won the world title in 2007 and bronze in Beijing last year took no chances and completed his victory in 8:33.5 ahead of London bronze winner, Abel Mutai (8:33.9) and Diamond League winner, Jairus Birech (8:34.2).

Athens 2004 bronze medallist, Paul Kipsiele Koech squeezed to the final as a fastest loser after coming home in sixth in the second race in 8:34.9.