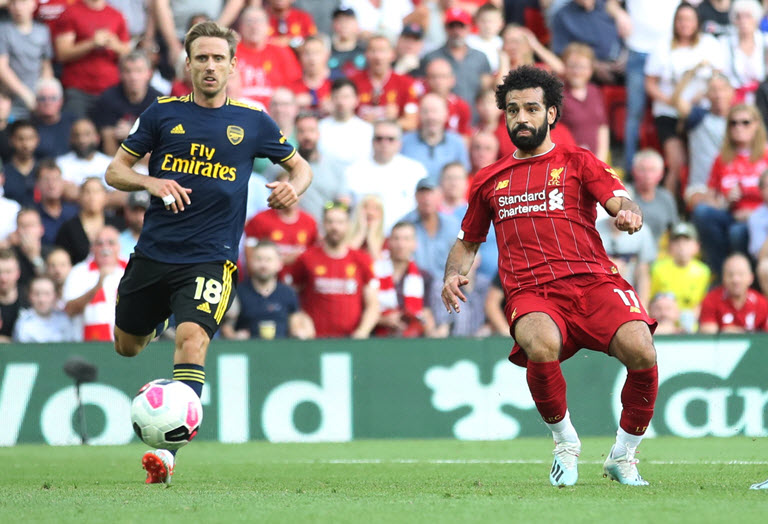 Liverpool maintained their place at the top of the Premier League and their 100% start to the season as Arsenal were well beaten at Anfield.

The Gunners, the only other side in the top flight to win their first two games, had opportunities to shock Liverpool in a tight first half, especially when record £72m signing Nicolas Pepe shot straight at keeper Adrian after running clear.

Liverpool took control when Joel Matip put them ahead with a powerful header from Trent Alexander-Arnold’s corner four minutes before the interval.

And any hopes manager Unai Emery had of watching his side mount a recovery were snuffed out in the 49th minute after a moment of madness from new signing David Luiz, who needlessly dragged Mohamed Salah back in the area.

Liverpool’s Egyptian attacker drilled home the penalty and then embarrassed Luiz again out on the touchline at the start of a dazzling run that ended with a low, curling finish into the bottom corner just before the hour.

Arsenal substitute Lucas Torreira pulled one back late on, but nothing was getting in the way of Liverpool’s 12th successive Premier League victory, equalling their best sequence in the top flight under Kenny Dalglish between April and October 1990.

Liverpool back in the old routine

Liverpool had moments when they stuttered against Southampton and their defence has looked unusually fallible – but this was a movie we have seen many times before at Anfield under Jurgen Klopp.

Arsenal have suffered badly here in recent seasons, losing 5-1 last season and 4-0 in Arsene Wenger’s final season. Once again, despite taking their time to hit top gear, Liverpool’s ruthlessness and intensity simply proved too much for Arsenal.

True, they gratefully accepted Luiz’s gifts but once Matip put Liverpool ahead the pressure and intensity applied to Arsenal was simply too much for the Gunners to resist.

And, as Arsenal discovered, when you fail to take chances to punish Liverpool, the inevitable outcome is that you will be punished yourselves.

Liverpool do not simply have a prodigious work ethic that makes life permanently uncomfortable for opponents; they also have world-class attacking options as illustrated by Salah’s brilliant weaving run and slide-rule finish for their third.

Klopp’s side missed out on the title by a single point despite only one loss, to champions Manchester City, last season – and three wins from three has quickly put the marker down that they intend to go one better and claim that first title in 30 years.

Luiz has a track record of success that suggests he may be able to bring moments of quality to Arsenal’s defence after his surprise £8m move from Chelsea – but there is no escaping he has the enduring capability to be a complete liability.

The Brazilian, at 32, is not going to change and so it proved as he delivered a moment of crass stupidity that killed stone dead Arsenal’s hopes of taking anything away from Anfield.

It is a stretch to say Arsenal had Liverpool on the ropes but, despite the overall domination of the European champions, the Gunners certainly had moments of threat through the pace and menace of Pepe and Pierre-Emerick Aubameyang. They would have started the second half with hope.

Luiz made it all count for nothing when he felt his best method of dealing with Salah’s 49th-minute raid into the penalty area was to blatantly drag him back by the shirt in a red-mist moment that did not even seriously require the intervention of the video assistant referee.

Salah, despite some ludicrous protests from Luiz, drilled home the penalty before taking him to cleaners when scoring Liverpool’s brilliant third.

Too much of the Arsenal’s playing out from the back was asking for trouble against this Liverpool side. Throw in the act of stupidity from Luiz and ultimately they got what they deserved, despite some areas for Emery to admire.