Sarri storms out of Chelsea training ahead of Arsenal final 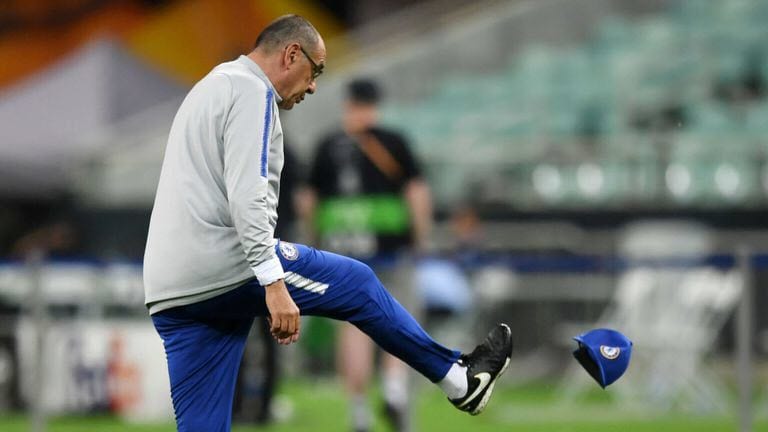 Chelsea have denied Maurizio Sarri’s furious exit from training ahead of the Europa League final was caused by an altercation between David Luiz and Gonzalo Higuain.

Shortly after the Italian had told the media of his ‘love’ for his Chelsea squad in his press conference ahead of Wednesday’s clash with Arsenal in Baku, a disagreement broke out between defender Luiz and striker Higuain towards the conclusion of the session at the Olympic Stadium.

Sarri, whose future with the Premier League club beyond the end of the season remains in doubt, was then seen repeatedly throwing and kicking his cap as he walked off the field, with the session ongoing.

However, Chelsea later denied that Sarri’s anger was caused by his players, with the club releasing a statement claiming the problem was that his squad were denied the chance to work on their set pieces.

A Chelsea spokesperson said: “Maurizio’s frustration displayed at the end of training was not related to any of his players, but was due to not being able to practise set-plays in the final 15 minutes of the hour-long training session as it remained open to media.”

Despite Chelsea having already secured qualification for next season’s Champions League by finishing third in the Premier League, a significant section of the club’s supporters have been unhappy with his management.

An inconsistent relationship with his players, highlighted when goalkeeper Kepa Arrizabalaga ignored his instructions during February’s Carabao Cup final, has been a factor in increasing doubts over his suitability for the club long term.

Sarri’s stock remains extremely high in his homeland, with Serie A champions Juventus placing him at the top of their list to replace the recently departed Massimiliano Allegri.

Chelsea will go into the final against their London rivals with major concerns over the fitness over N’Golo Kante, whose potential absence could leave Sarri with just three midfielders to choose from.

Sarri earlier gave Kante a “50-50” chance of featuring on Wednesday, but the France star appeared to be in discomfort during the session that followed.

Arsenal, who finished fifth in the Premier League, require victory to qualify for next season’s Champions League, a factor that should ensure a highly intense encounter in Baku.