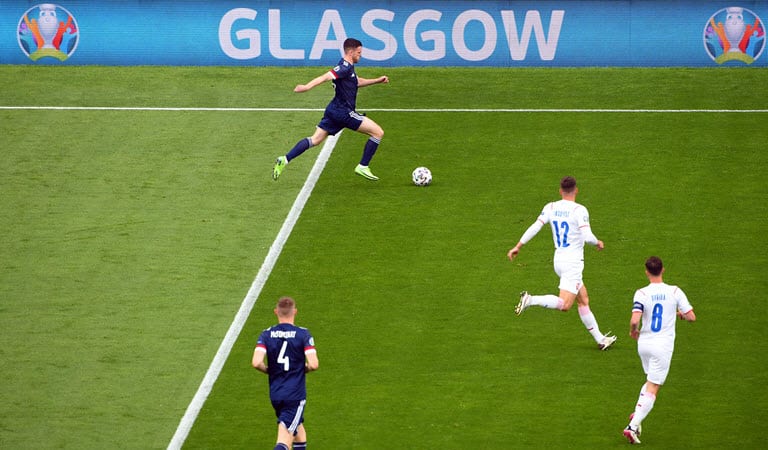 Scotland must ensure their battling 0-0 draw with England is not a “pointless result” as they bid to make history at Euro 2020, says captain Andy Robertson.

After opening with defeat by the Czech Republic, the Wembley stalemate keeps alive Scotland’s hopes of reaching the knockout stage of a major tournament for the first time.

“I thought we were the better team,” Robertson told BBC Radio 5.

“On another night we could have won it and I don’t think anyone can really argue with that.

“The feeling that we have now, the feeling that the fans have, it’s important we keep that and it’s not for nothing. We take it down to the last game and that’s all we ask. We have to use it to get out of the group.”

Steve Clarke’s side matched their hosts at Wembley, with Stephen O’Donnell having a first-half shot saved and Lyndon Dykes seeing a drive headed off the line after the break, while Che Adams slashed wide from six yards.

Subdued England hit a post with a John Stones header, and began the second half brightly, but were booed by their own fans in the closing stages of a famous result for Scotland.

Clarke – whose four changes included a first start for 20-year-old midfielder Billy Gilmour and a recall for Che Adams in a two-pronged attack – believes his side answered their critics after the 2-0 loss to the Czechs.

Wing-back O’Donnell, who was criticised after Monday’s Hampden defeat, retained his place and shone in a memorable collective display.

“I’m not surprised about the brilliant performance, because I know how good my team is,” Clarke told BBC Scotland. “Unfairly criticised after Monday’s game – they’ve silenced a lot of people tonight.

“This team has been outstanding for the last 18 months. The players are so honest it’s frightening, and they do it all for their country. They deserve a bit more respect.”

Scotland remain bottom of the group – Croatia are above them on goal difference after drawing 1-1 with the Czechs – but return to Hampden on Tuesday with their qualification hopes revived.

“We’ve given ourselves a chance in the last game to get out of the group,” Clarke added. “Now we rest, recover, and get ready for what is a cup final against Croatia.”