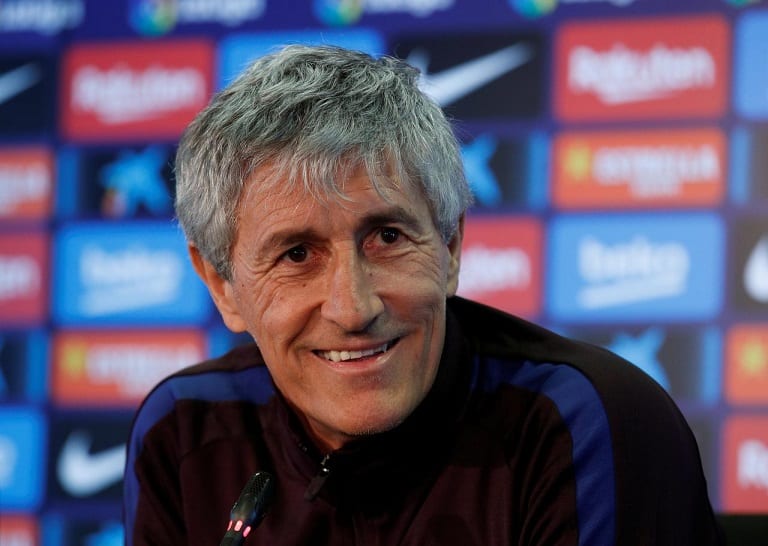 Barcelona’s new manager Quique Setien says he is still buzzing with excitement about being put in charge of the Spanish champions as he prepares for his first game with his new side, at home to Granada on Sunday.

The 61-year-old was the surprise choice earlier this week to succeed Ernesto Valverde when the coach was sacked on Monday despite leading Barca to back-to-back titles and taking them to the top of the standings at the halfway point of the season.

“Every morning when I wake up I say to myself ‘Jesus Christ, I’m going to go and coach these players’,” Setien told a news conference on Saturday.

“The week has gone very well, much better than I had expected. You never know how players are going to respond, but I have been surprised by the attitude they have shown to work and accept the changes that I am proposing.”

A former journeyman midfielder, Setien has spent most of his coaching career outside the top flight, with his best achievement being when he guided Real Betis to sixth place in La Liga two seasons ago.

Setien has put his boots on and joined some of the team’s training sessions himself, and was filmed laughing with midfielder Arturo Vidal after the Chilean tried to embarrass him by passing the ball through his legs.

“I like to feel football from the inside, so I like to participate in parts of the session and transmit my knowledge to the players that way,” he explained.

Having been brought to the club with the task of restoring the sense of excitement Barca used to be renowned for, Setien’s side will be expected to entertain fans against Granada.

But he said no-one will be compelling the team to turn on the style more than him.

“The club are not demanding, I am. I’ve never accepted low standards, no-one at the club will have to say anything to me because I’ll come to work every day eager to transmit to my footballers that we have to win,” he said.

“Tomorrow I hope we see a Barca team that is not over-excited but that is motivated to put into practice all the things we have been working on this week.”

Setien will be without second top scorer Luis Suarez for four months due to a knee injury, and Ousmane Dembele is also out for the Granada game along with Frenkie de Jong who is suspended.