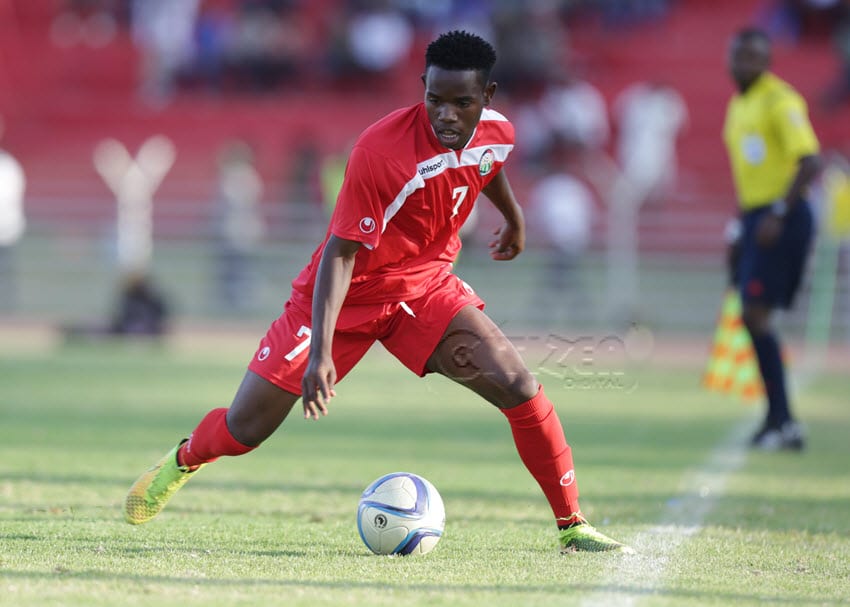 Two days after being included in the senior Harambee Stars national side, the player has been named in the 27-man squad of the Under-20 outfit that reports to camp on Monday to prepare for the friendly against Sudan.

On Monday Stars first coach; Stanley Okumbi named his Ochieng in his team that will prepare for the two friendlies against Sudan and the full international against Tanzania and barely 48 hours later, his Under-20 counterpart, John Kamau followed suit.

For the senior side, he was listed as ‘Ovella Ochieng’ and for Under-20, the same player was recorded ‘Michael Ochieng’ further fuelling the intrigue.

“We will be playing our friendly after Harambee Stars first match against Sudan. I don’t know how much he will be used in the senior team, if he has little playing time then we will use him in our match.

“He is talented and the more he gets time on the pitch the better. We are in the business of developing such talent, but it will not be a big deal if he won’t be available for the youth team. I have over 25 players to choose from,” asserted the former Thika United and Posta Rangers coach.

He was singing for the same hymn sheet as Okumbi who offered an almost similar defence to his controversial inclusion and subsequently playing Ovella and Sharks teammate, Patillah Omoto in Stars away loss to Guinea Bissau in an AFCON qualifier.

With the Under 20 and senior sides playing their Sudanese counterparts next Friday, Ovella could make history as the first ever player to play for two national teams on the same day if Okumbi and Kamau decide to share him since he is eligible for selection!

Vincent Wasambo is the other player from the Sharks outfit that is bankrolled by Football Kenya Federation (FKF) President, Nick Mwendwa.

On the Under-20 squad, Kamau revealed fears over cheating at the recently concluded Kenyan Premier League youth tournament was the reason why many that starred in that competition missed out on selection.

He is keen to avoid another scandal after Kenya was expelled from the CAF Under-20 qualifiers for fielding over-age players.

“I have reservations about the ages of some the players we saw in the teams (KPL under 20). Let’s face the reality, they may have documents to show they are within the right age limit but we have to stand firm if we have to fix the problem of age cheating.

“It’s a problem that the federation and I are serious about. We know it’s not easy to achieve a 100 percent but progressively we can,” explained Kamau when asked why most of the players who featured in the recent KPL under championship are missing in his team.

Ulinzi Warriors captain Ibrahim Shambi who led his side the tournament glory early this month, is among those in the squad.

Gor Mahia’s Under-20 star, Amos Nondi, who has played once for the senior KPL champions this season and teammate; Leroy Otieno also made the cut as did Mathare United pair of Andrew Kisuli and Job Ochieng who sturdy at Sunrise Academy.

Stars winger, Ayub Timbe’s younger brother; Musa Masika of Laiser Hill Academy and two from Muranga’s Kigumo Bendera High School – James Gichinji and Michael Njuguna- are also in the team alongside Abdiraham Muhammed from Takwa in Isiolo among others.

Kenya will play Sudan, who advanced from the preliminary Zambia 2017 AFCON youth qualifiers at their expense after successfully challenging before Confederations of Africa Football (CAF) the team had five over age players last month.

Kamau has meanwhile lauded the federation for organizing the friendly despite having no near future international competitive assignment.