Menengai Oilers centre Eric Ombasa has been included in the Kenya 7s squad ahead of this weekend’s London 7s, replacing Dennis Ombachi who according to the Kenya Rugby Union has failed to travel due to personal reasons.

Shujaa flew to London yesterday for the London and Paris legs of the 2017/18 HSBC Sevens World Series.

Ombasa was selected as the 13th player by coach Innocent ‘Namcos’ Simiyu and he is expected to link up with the team later.

He made debut  in the World Rugby Sevens last year after he was included in the team that finished 12th in Cape Town Sevens in December last year.

His call up came after a sensational performance in the National Sevens Circuit last year.

Ombachi who trades for Nondies as a winger has been out since injuring his ankle at the season opener of the HSBC World Rugby Series in Dubai in December last year. 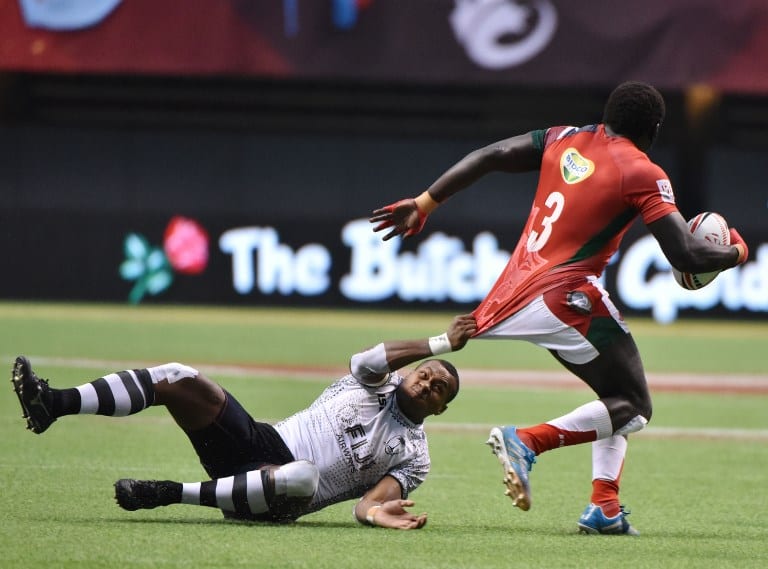 At London 7s, Kenya Sevens will kick off their campaign on Saturday against Mike Friday’s USA in pool C at 1.42 pm (EAT) in Twickenham Stadium, London. Their second pool match will be against France at 4.48 pm the same day, before their group matches against England at 8.16pm the same day.

Shujaa have met their former boss Mike Friday’s USA thrice this year drawing 19-19 in the Hamilton Sevens in February, and defeated them twice in the semi finals of the main cup in Vancouver and group stages in Singapore in March and April respectively.

France has been regulars to Innocent Simiyu charges playing them four times this year with Shujaa winning thrice and France winning only once.

In February, they met twice in the Las Vegas and Sydney Sevens, France winning 19-17 in the USA, but later lost to Kenya 17-14 in Australia.

In March, they were in the same pool of the Vancouver Sevens where Kenya continued their winning streak defeating France 14-7, and later went further to finish runners up after losing 31-12 to Fiji in the finals.

Last month they played in the same pool where Simiyu Charges outshined the latter 34-0.

The Innocent Simiyu coached side will be aiming to extend its points tally as well improves its sixth place in the IRB standings. Shujaa have so far accumulated 93 points from the last eight legs.