Situma: It’s a chance for Tusker to redeem themselves in Africa 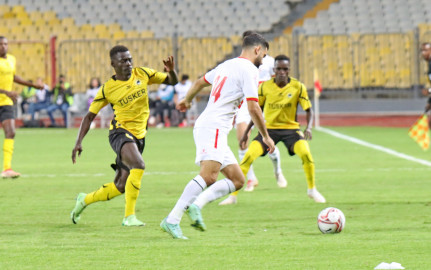 Tusker dropped to CAF Confederations competition after going down to Zamalek with an aggregate of 5-0.

Former Tusker Captain James Situma believes his former team has all it takes to turn tables in the second tier club tournament in Africa.

Tusker dropped to CAF Confederations competitions after going down to Zamalek with an aggregate of 5-0 and will be facing Tunisian side Sfaxien.

“This is like a second chance for them to redeem themselves and may be make a mark because it has something to play for. With the arrival of experienced players, it means it will bring more competition and thus whoever is picked ahead of the other should be able to bring results,” said Situma.

Situma advises Tusker to take their chances at home and avoid making mistakes like they did with Zamalek.

“It was a false start for Tusker at home. They would have gone for a win here then aim for a draw in Egypt.”

“Tusker allowed Zamalek to take charge here at Nyayo and won by a solitary goal, which posed a task-hill for Tusker while it made Zamalek so comfortable while playing at home. So in the next attempt (in the Caf Confed), they should go for a win then force a draw in the return leg away,” states Situma.

He writes off the signing spree that Tusker conducted which is believed to have dented Brewers' chance of excelling in the CAF ties since the players had not gelled.

“A team goes for a player they have already identified the position they want him to play, thus signing a number of players should just give you options. These new players need to adapt very fast because they are experienced and that makes them have all that it takes to do well and redeem themselves with the Confederations,” said former Ingwe defender.

He added that proper preparations for Kenyan teams would play a big role since here, teams are not well prepared for continental competitions.

“History has never been on our side when we are meeting Egyptian teams but I think the difference between Kenyan teams and them is preparations and technical ability. They are ahead of us,” he stated.

The former Oserian forward says it was possible to make it to the group stages for Tusker had the players never respected Zamalek so much.

“Tusker had the capacity to eliminate Zamalek had the players never respected the Egyptians.”

“I remember (in 2002) Oserian Fastac missed by a whisker eliminating Al Ahly because we lost 2-1 but we were unlucky here since we needed just a goal but we ended up drawing 0-0 and we got eliminated. It was out of commitment by players,” recalled Ambani.

Tusker’s last appearance in the Champions League was in 2017, where they lost 3-2 on aggregate to Mauritius’ AS Port-Louis in the preliminary round.

The previous meeting between Tusker and Zamalek in this competition was in 2005. The Egyptian won 3-1 in Cairo after losing 1-0 in Nairobi in the first leg.