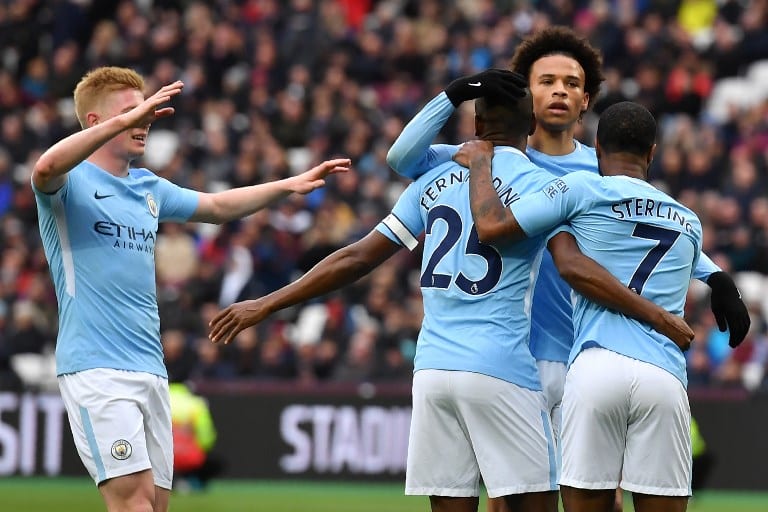 Manchester City equalled the Premier League record for most wins in a season as the imperious champions powered to a 4-1 victory at West Ham on Sunday.

Pep Guardiola’s side now have 30 wins this term, matching the record set by Chelsea last season, and will take sole possession of the milestone with one more success in their last three games.

Sweeping West Ham aside with their trademark swagger, City went ahead through Leroy Sane before an own goal from their former defender Pablo Zabaleta doubled the lead.

Aaron Cresswell’s free-kick reduced the deficit before half-time, but Gabriel Jesus and Fernandinho netted for City after the interval.

Simply untouchable for most of the season, City are bidding to cement their status as one of the all-time great Premier League teams by rewriting the record books.

They have scored 102 league goals in 35 games, making them the fastest English top-flight side to reach the century mark since Everton in 1931-32.

In contrast, West Ham face an anxious finale to a troubled season as they fight to avoid the drop in their last three games.

David Moyes’ men have won once in their last eight league fixtures and sit just three points above the relegation zone.

With the title wrapped up two weeks ago, Guardiola has had no problems keeping his players motivated.

Last weekend’s 5-0 thrashing of Swansea showed the champions hadn’t taken their eye off the ball, even if goalkeeper Ederson’s unsuccessful campaign to take a penalty was a sign of the relaxed mood in the City camp.

After being given a guard of honour by West Ham’s players before kick-off, City set about dismantling their generous hosts.

It was Sane who landed the first blow in the 13th minute, although the German winger’s 14th goal of the season owed more to good fortune than great inspiration.

Taking possession on the right-hand side of the West Ham area, Sane was granted too much time and space by the home defence.

He took full advantage, unleashing a powerful strike that took a wicked deflection off West Ham defender Patrice Evra on its way past the wrong-footed Adrian.

When City struck again in the 27th minute, the farcical manner of the goal left the ragged Hammers red-faced.

Adrian’s rash sprint off his line let in Sterling for a shot that was headed clear, but the ball was worked wide to Kevin De Bruyne.

De Bruyne sent over a low cross which Adrian could only deflect towards Hammers defender Declan Rice, whose panicked clearance hit Zabaleta and trickled into the net.

City were in complete control, yet they suddenly lost focus.

Ederson was lucky to get away with dwelling on the ball as the City keeper lost possession to Marko Arnautovic, who slotted home only for the striker’s effort to be ruled out for a foul.

City paid for their brief dip in the 42nd minute when Cresswell bent his free-kick over the wall and through Ederson’s weak attempted save.

Nicolas Otamendi was fortunate to escape a second booking for barging into Manuel Lanzini.

But City regained their composure at half-time and normal service was resumed in the 53rd minute when Jesus bagged his 16th goal of the season.

Sterling, picked out by Jesus, made a fine run and pin-point pass that allowed the Brazilian to steer home from close-range.

City weren’t finished yet and Fernandinho buried Sterling’s pass in the 64th minute to seal the rout.