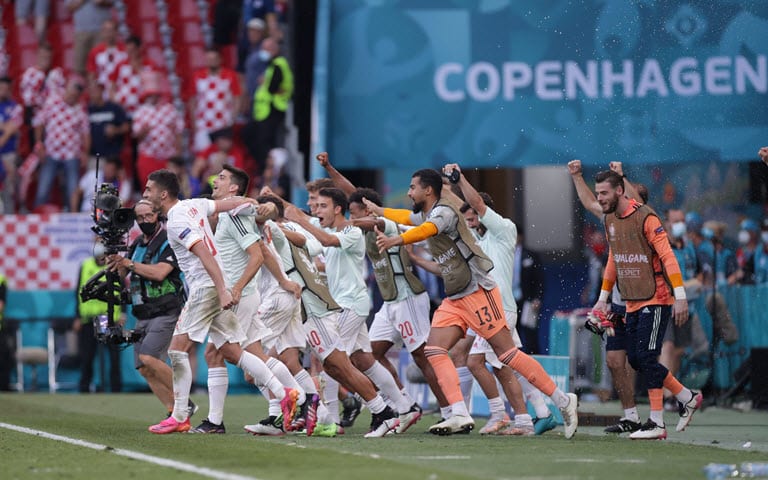 Spain reached the quarter-finals of Euro 2020 in dramatic fashion by beating Croatia 5-3 in extra time after an eight-goal thriller.

Croatia substitutes Mislav Orsic and Mario Pasalic forced extra time with two goals in the last five minutes but Spain regrouped to seal their passage from a knockout tie for the ages.

Striker Alvaro Morata, who has revealed his family had been threatened during the tournament, silenced his critics when he thumped in Spain’s fourth goal in extra time in Copenhagen.

Mikel Oyarzabal then added a fifth three minutes later to finally see off Croatia, who bravely fought back from 3-1 down in normal time when they looked well beaten.

The drama in a highly entertaining last-16 tie match began when Spain goalkeeper Unai Simon failed to control Pedri’s 49-yard back pass to present Croatia with the lead.

That bizarre own goal sparked a response from Spain though, with Pablo Sarabia thumping in an equaliser, Cesar Azpilicueta heading in another and Ferran Torres making it 3-1.

Spain looked comfortable and poised to cruise through but Croatia burst into action through their substitutes late on to force added time.

The thrilling moments continued as Simon made up for his earlier error with a heroic stop from close range to deny Andrej Kramaric before Morata went up the other end to crucially put Spain ahead again.

It was the most entertaining match of the tournament so far and three-time champions Spain will face the winner of France and Switzerland (kick-off 10pm) in the quarter-finals.