Spurs hot on Chelsea’s heels, Everton up to fifth 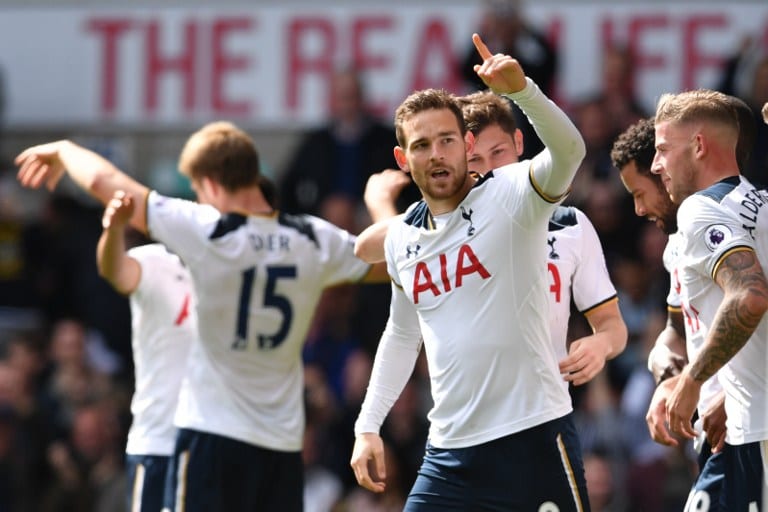 Title-chasing Tottenham thrashed Bournemouth 4-0 to move within four points of Premier League leaders Chelsea, while Everton climbed to fifth place with a 3-1 win over Burnley on Saturday.

Mauricio Pochettino’s side are hot on Chelsea’s heels as the title race enters the final furlong and their dominant display at White Hart Lane keeps them in with a chance of being crowned champions for the first time since 1961.

Harry Kane, making his first start since suffering an ankle injury five weeks ago, scored his 20th league goal this season with a predatory 48th-minute effort.

Vincent Janssen bagged a rare goal in second-half stoppage time as Tottenham chalked up seven successive league wins for the first time since 1967.

Kane is the first Tottenham player to score at least 20 league goals in three successive seasons since Jimmy Greaves in the 1960s.

“I am proud of our players after that performance. We have to wait to see what happens,” Pochettino said.

“At the end of the season when everyone is tired, we need everyone to have the right mental attitude and happiness helps.

“The three points are very important to keep our dream.”

At Goodison Park, Everton improved their prospects of qualifying for Europe as they moved above Arsenal and United.

Everton defender Phil Jagielka broke the deadlock in the 49th minute before Sam Vokes equalised from the penalty spot for Burnley three minutes later after being brought down by Joel Robles.

Ross Barkley started for Everton amid the controversy over a British tabloid columnist’s unsavoury criticism of the England midfielder and it was his shot that deflected off Ben Mee for a 71st minute own goal.

Leicester suffered a dispiriting warm-up for their decisive Champions League quarter-final clash as they squandered a two-goal lead in a 2-2 draw at Crystal Palace.

Craig Shakespeare made only two changes ahead of Tuesday’s home second leg with Atletico Madrid, when Leicester will try to overturn a 1-0 deficit.

Beaten by a controversial penalty from Antoine Griezmann in Madrid, the Foxes took the lead in the less glamourous surroundings of Selhurst Park thanks to a Robert Huth header in the sixth minute.

But Palace had enjoyed shock wins over Arsenal and Chelsea recently and they got one back through Yohan Cabaye two minutes later before Christian Benteke capped the fightback with a 70th minute header.

Hull’s hopes of avoiding relegation suffered a blow as they lost 3-1 at Stoke.

Marko Arnautovic put Stoke in front in the sixth minute before Hull drew level through Harry Maguire in the 51st minute.

Peter Crouch nodded Stoke back ahead in the 66th minute and Xherdan Shaqiri sealed the points in the 80th minute to leave fourth bottom Hull only two points above the relegation zone.

Third bottom Swansea were unable to take advantage of Hull’s slip as they lost 1-0 at Watford after Etienne Capoue netted in the 42nd minute.

Sunderland remain on the brink of relegation despite salvaging a 2-2 draw against West Ham at the Stadium of Light.

It was bottom of the table Sunderland’s first league goal in 701 minutes and their first at home since January 14.