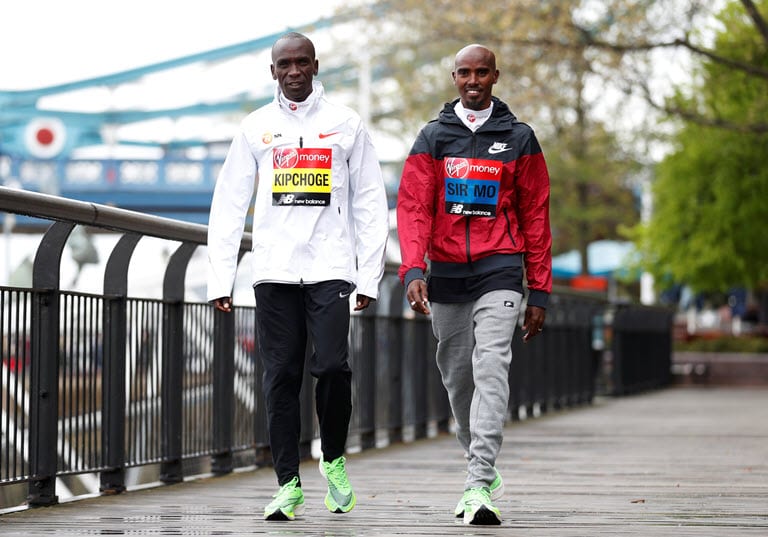 Sport thrives on its most enticing duels, its classic head-to-heads. Think Ali-Frazier, Navratilova-Evert and Coe-Ovett. Think greatness versus greatness.

No wonder then that both Eliud Kipchoge, the great marathon runner in history, and Sir Mo Farah, perhaps the greatest track distance runner of all-time, can both appreciate why their clash in this Sunday’s Virgin Money London Marathon is so eagerly anticipated; why it feels so important.

“Eliud is a great athlete, he’s won so many marathons and I’ve won a lot of medals on the track but this is the next quest of my career. I really believe I can run well and win more major marathons.”

Farah is a 10-time global champion, a colossus who won two Olympic 5,000m and 10,000m ‘doubles’ back-to-back; he bows to no one in endurance racing on the track.

Yet the respect with which he offered his tribute to Kipchoge told you everything he feels about the man who stands unchallenged atop the mountain he now seeks to climb. Farah is just a novice; the Kenyan is the serene master.

But the apprentice is catching on fast. Very fast. After winning his first major marathon in Chicago last year – in a new European record mark of 2:05:11 – even the unflappable Kipchoge sounded impressed. “I’m really surprised that he’s learning very fast,” he said on Wednesday. “As far as the sport is concerned, he is a fast learner.”

So, is the great Kipchoge worried? It has to be said the man who has won his last 10 marathons, culminating in his truly extraordinary world record of 2:01:39 in Berlin last year, did not exactly seem so.

“No, it doesn’t worry me – but it makes me get interested in him, because that’s what you want in sport,” smiled the 34-year-old. “That’s what helps you perform.”

Of course, this is no two-horse race, though. As is almost routine with the London Marathon these days, the pair are just part of one of the most stellar casts ever assembled; their fantastic achievements giving the 2019 edition a particularly enticing allure.

If defending champion Kipchoge can win a fourth title here, he will become the first man to achieve a quartet of victories. Yet even if he still possesses an invincible air after nearly six years without a defeat, it’s the speed of Farah’s ascent that suggests we have no idea yet of what he is capable of going on to achieve.

Still, ’Sir Mo’ is making no great predictions; except to say that he now feels a very different marathon runner to the one who came home third in last year’s race, some two minutes behind the Kenyan.

‘Eliud is a great athlete’ 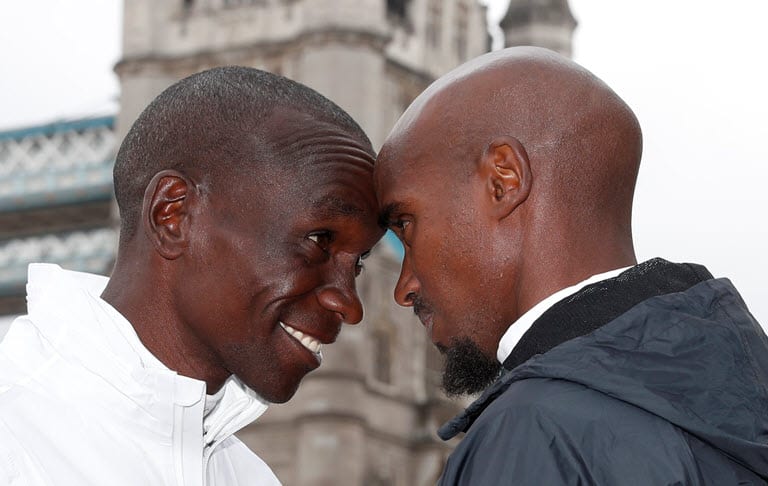 One other thing he’s sure of is that, if he can beat Kipchoge, it would feel like an achievement to set alongside his very finest. “My aim is to win the London Marathon one day, that is my task, but you can’t take anything for granted because Eliud is a great athlete, and if I do beat him it would be an amazing achievement.

“I’m learning as I go along. The marathon is completely different to track – and racing against Eliud in London last year felt like having to learn the hard way – but I believe I did learn a lot.”

Wasn’t there always a danger of feeling he was running for second place when Kipchoge was in the field? Should the British fans, who will be lining the streets on Sunday expect to see him win, just because they’ve been used to seeing him prevail in track races down the years?

“Yeah, why not? If that’s what they’re used to, then why not,” he said today. “I don’t line up and say to myself, ‘I’m going to try to finish third or fourth’.

Even though I’m still learning, I’m going to go out there and give it my best and sometimes you end up coming first, and sometimes you get beaten by the better man and you have to accept that, go back home and say ‘what do I need to change to beat him?’”

Farah has worked on a new plan to beat the seemingly unbeatable Kipchoge with coach Gary Lough, having enjoyed what he described as a successful three-month training stint in Ethiopia, a spell only marred for him by the theft of some of his money and belongings, including a present of a new watch from his wife, from his hotel on his 36th birthday.

“It’s really exciting to be back,” he said. “As an athlete you always have to be willing to change stuff, the goalposts don’t stay the same, and as you get stronger in the marathon, you have to change things round. Me and Gary are pretty confident about where my training is at. We’ve done everything we need to do; the last three months have been okay.

“After each race, you get a bit better, that bit more experienced. And in Chicago, I was just enjoying it; and as an athlete, I run my best when I’m enjoying it and feeling happy. I believe I could have gone a little bit faster there – 2:04-something but it wasn’t about the time, it was about winning the race – my first major marathon win.

“I believe in my training, everything has been done. I just have to be smart in the race, give it 110 per cent and you will get that from me.”

Whether 110 per cent is enough to topple Kipchoge, though, is the question. The Kenyan sounds ominously confident – in his own uniquely humble way.

“The world record is out of my mind right now but if I can win again in London, I will be a happy man because it will be my first race after running a world record,” he smiled. “London is crucial in my career – for me, it’s the next thing after breaking a world record.”